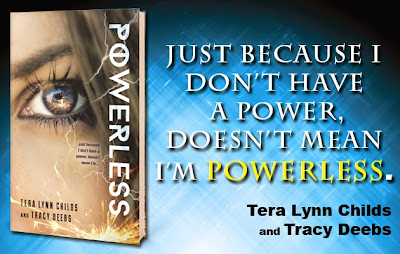 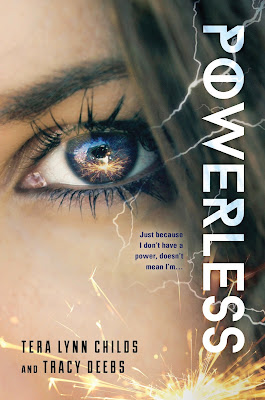 Kenna is tired of being "normal."

The only thing special about her is that she isn't special at all. Which is frustrating when you're constantly surrounded by superheroes. Her best friend, her ex-boyfriend, practically everyone she knows has some talent or power. Sure, Kenna's smart and independent, but as an ordinary girl in an extraordinary world, it's hard not to feel inferior.

So when three villains break into the lab where she interns, Kenna refuses to be a victim. She's not about to let criminals steal the research that will make her extraordinary too.

But in the heat of battle, secrets are spilled and one of the villains saves her life. Twice. Suddenly, everything Kenna thought she knew about good and evil, heroes and villains is upended. And to protect her life and those she loves, she must team up with her sworn enemies on a mission that will redefine what it means to be powerful and powerless...

“You never answered my question. What are you doing down here so late?”

Those bright blue eyes sear into me as he takes a step back. “I have to go.”

His sudden evasiveness makes me suspicious, so when he starts to move past me, I sidestep into his path. “Excuse me,” I say, “but this is a secure level. Are you even authorized to be down here?”

A security guard? The facility might be so big that I can’t keep track of everyone who works in every lab, but I know all the guards by name. Especially the night guards, since I’m usually the last one here.

Travis and Luther are on duty tonight. Travis and his wife just had their first baby, a girl named Tia. Luther is old enough to be my great-grandfather and he never married.

I take half a step back as my suspicions turn to concern. “Who’s your dad?” I demand.

This guy definitely has the look of a villain.

What if he really is one?

He glances nervously over his shoulder. “He’s—”

I shake my head and start to walk away before he can finish the lie.

He reaches for me, but I shrug him off. My heart is beating way too fast. This could go way bad, way quick.

“Please, just listen.” He waits until I’m looking him in the eye before he continues. “You know me,” he says, his voice taking on this weird, hypnotic tone. “We’ve met before.”

His eyes start to burn brighter and brighter. Oh crap. He must be a villain, and one with a psy power. The vilest kind. Fear and anger collide inside me as I wonder what to do about him trying to mess with my head. How to play this? I can’t exactly tell him I’m—

Suddenly, the floor beneath my feet shudders violently, knocking me off balance. I lurch forward into Dark-and-Scowly’s arms. He catches me, grabs my upper arms, just as a concussion wave of air and sound hits us.

That sounded—and felt—like a bomb went off in the lab. If we weren’t a hundred feet underground and shielded by every protection science and superheroes can create, I’d think the supervillain Quake had struck. But that’s impossible.

Then again, impossible doesn’t always apply in the superhero world. After all, impossible didn’t keep Dark-and-Scowly from being where he doesn’t belong.

Suddenly, every alarm in the facility blares. I freak. The lab! All that research—Mom’s and mine—is priceless. The superhero blood samples alone are more valuable than anything else in the building.

Panic overrides judgment and I push away, but his grip only tightens. The jerk. A little super strength would be really useful right now.

“Who are you?” I demand, struggling to get out of his grasp. If he really is a villain, I don’t want him near me or this lab. Not with what villains are capable of. “What have you done?”

He doesn’t answer. More pissed than ever, I fake left and pull right. He follows my fake-out, and as his hair swings with the momentum, I see the mark I’d been looking for earlier. Not under his right ear like the superheroes. Under his left. 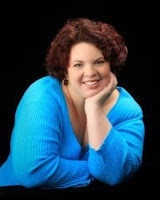 One fateful summer, Tera Lynn Childs and Tracy Deebs embarked on a nine hour (each way!) road trip to Santa Fe that ended with a flaming samurai, an enduring friendship, and the kernel of an idea that would eventually become Powerless. On their own, they have written YA tales about mermaids (Forgive My Fins, Tempest Rising), mythology (Doomed, Oh. My Gods., Sweet Venom), smooching (International Kissing Club), and fae princes (When Magic Sleeps). Between them, they have three boys (all Tracy), three dogs (mostly TLC), and almost fifty published books. Find TLC and the #TeamHillain headquarters at teralynnchilds.com. Check out Tracy and the #TeamVero lair at tracydeebs.com. Hang out with all the heroes, villains, ordinaries, and none-of-the-aboves at heroagenda.com.