Spotlight
Why My Love Life Sucks
(The Legend of Gilbert the Fixer Book # 1)
by Shevi Arnold
Released: 23rd March 2010 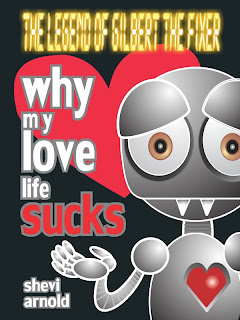 Seventeen-year-old Gilbert Garfinkle is the ultimate tech geek. He likes to take apart, figure out, and fix things, and he dreams of someday fixing the world. But now his own life has been taken apart by the one thing he'll never be able to figure out. Her name is Amber, and she's a gorgeous girl with a killer smile who wants to turn him into her platonic BFF--literally forever! It's the ultimate geek's ultimate nightmare, and it leaves Gilbert asking life's ultimate question: "Why me?"

Why My Love Life Sucks is a funny novel about geeks, girls, gadgets, vampires, and the start of a most unlikely friendship. It's the first book in The Legend of Gilbert the Fixer, the series that proves it takes the ultimate geek to be the ultimate hero.

ADD ON GOODREADS
Watch the trailer


BUY LINKS
Amazon | BN.com | Smashwords
Freado (where you can start reading the book for free)


When I was little, I'd take them apart and analyze them, kind of like what Gilbert Garfinkle--the hero of Why My Love Life Sucks--does with electronics. This continued into my college years, when I majored in English Literature and Theater Studies.


For twelve years I worked in magazines and newspapers as an editorial cartoonist, illustrator, editor, arts-and-entertainment writer (specializing in children's entertainment and, of course, comedy), and a consumer columnist.


My last job was at the Jerusalem Post, but I had to quit when my family decided to move to New Jersey to pursue better education options for my autistic son.


This was in February 2001. Since then I've written 40 picture books and seven novels for kids and teens, four of which I've indie published. I was an ABNA quarterfinalist with Why My Love Life Sucks, and I won third place in SmartWriter's Write It Now contest in the the YA category (which was judged by Alex Flinn, the author of Beastly) for my romantic, YA ghost story, Ride of Your Life.


The night after Amber bites Gilbert, he wakes up in pain and confusion in a hospital. He wants answers, so he escapes and heads to the arcade where they first met.


“Where to?” the driver asks.
“Bucky Bee’s on Broadway.”
Everything seems mercifully quiet the moment I close the door of the cab, but I’m noticing some extremely unpleasant odors. There’s the smell of cigarettes, the musky odor of sweat, and something that smells like grungy gym socks. The lights outside on the streets of New York are so bright and colorful. It’s like I’m Dorothy in The Wizard of Oz, when everything goes from black-and-white to Technicolor. I have a feeling we’re not in Kansas anymore, Toto.
The people remind me of television commercials for fruit-flavored breakfast cereals. So many flavors, and all so yummy. This is so wrong. It’s like I’m that damn shark from Finding Nemo. I have to keep telling myself that people are people, not food. I tie my sneakers, and try to spend the rest of the ride just staring at my feet.
The driver lets me off. After paying the fare, I’m left with thirty-four dollars from the money Uncle Ian gave me, and I still have the other thirteen in my wallet, or rather Amber does.
“Hi, Alex,” I say as I walk into Bucky Bee’s. “Anything broken tonight?” I don’t know why I said that. Force of habit I guess.
“Gilbert?”
“Yeah?”
“You look different.”
“I've had a really bad day.” Oh, wait, he’s probably talking about my glasses. “Oh, and I . . . got laser eye-surgery.” Okay, stupid thing to say. I’m pretty sure you have to wear goggles for weeks after eye surgery.
“Really, that fast?”
“Oh, yeah.” I should have said contact lenses.
“Looks good on you. Maybe I should get laser eye-surgery too.”
He informs me that all the machines are in working order, so my services aren’t needed tonight. Still he lets me in.
I scan the tables. Amber isn't at one. So what do I do now?
Oh, wait, there she is, leaning against the wall next to the game I fixed last night. She’s still wearing her bright red dress, and the navy-blue jacket she borrowed from me is draped over her shoulders. She sees me, and she comes over. I find an empty booth and sit down. She sits opposite me. Bucky Bee’s looks like a rainbow threw up in it, the colors are so damn bright.
“I hardly recognized you,” Amber says, with a wide smile. “You look great.”
“Great like a corpse at an open-casket funeral?”
“No, silly, great as in you're no longer wearing those nerdy glasses, your zits are gone, your hair and skin look terrific, and you have this really sexy brooding stare.”
“Brooding stare?”
“Mmm . . .” Amber is looking at me and making a yummy sound. I can't help but twitch, knowing how she thinks I taste and what part of me she’s tasted. “It’s very sexy.”
“This is not a brooding stare. This is my I'm-so-mad-I-could-kill-you face.”
“Well, whatever it is, it's working for you.”
That’s it. I can't keep my anger inside any longer. “How could you do this to me??”
Wait a minute . . . Did I just yell in Bucky Bee's?
Fortunately the noise level is so high I don't think anyone’s noticed. Oh, I’m wrong. Alex is staring at Amber, so he’s noticed, and he probably thinks I'm nuts to be yelling at a girl who is way out of my league. Wish I didn't know what you don't know, Alex. And Chloe, who is working at the counter tonight, is also staring at me. And some guy or girl dressed as Bucky Bee may or may not be staring at me. It’s hard to tell with the costume on.
Amber’s looking around too. We have to wait until no one seems to be staring at us anymore. It takes several excruciatingly long minutes.
She sighs. “Look, Gil, I know you're scared.”
“That's putting it mildly.”
“But the truth is being a vampire—”
“Please don't say that word.”
She raises an eyebrow. “Vampire?”
“Please don't say it.”
She laughs and shakes her head. “Sounds like someone is in denial.”
She’s right. I am in denial. But what else can I do? How the hell am I supposed to accept this? “I. Am. So. Screwed.”
“No, you're not.” She has this huge smile on her face, and I want to believe her, but . . . “Listen to me, Gil. In a few days after the pain has worn off, you're going to see this is the best thing that ever happened to you.”

﻿
Character BIO: Amber
Age: claims to be 17, although she appears to be 15
Goal: to turn Gilbert into a vampire and her platonic BFF--literally forever
Weakness: low self-esteem (although she hides it well)
Favorite things: bacon, pizza, candy, her friends, boys, dancing, laughing and smiling, and above all being liked


Why My Love Life Sucks is written from Gilbert’s point of view, and the first time we meet Amber is on the first page. As Gilbert lies paralyzed by her vampire bite, he looks back at the events of the night, starting with what happened when he brought her to his room: “Amber laughed. It was a nice laugh. I felt so relaxed, because she’s so beautiful. They say there’s no point in worrying about the things you can’t control, and I figured I didn’t have a chance in hell with her. Guess I was right, but not in the way I thought.” Aside from being drop-dead gorgeous, seemingly sweet, funny and quick, asking Gilbert to kiss her, and the whole turning-him-into-a-vampire thing, she remains mostly a puzzle for the start of the book, a puzzle Gilbert feels compelled to figure out. And he does figure out some of it by the end of this book. But there’s a lot more to Amber than meets the eye, and it will take the rest of the series for readers and Gilbert--and in some ways Amber herself--to truly know who and what she is.


﻿
﻿
a Rafflecopter giveaway
Join in the Facebook Event
Posted by Stacey at 9:00 AM