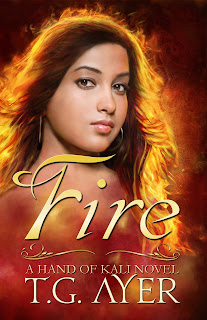 Add on Goodreads
Normal people sneak out to a party and have fun. Maya Rao ends the evening by incinerating the guy who attacks her.
Nik Lucas, sexy, new in town and totally forbidden, happens to walk in on her. Normal guys would run for the hills. Nik knows a whole lot more than he's telling.
Maya doesn't believe the gods are real, doesn't waste her time with mere mythology. But when gods, demons and hellhound's become the new normal and wielding fire becomes her new skill, she must decide what it is she really believes.
Can Maya accept that normal is something she will never be because it isn't normal to be ...the Hand of Kali.
EXCERPT
Fear spun Maya around on stricken feet. To defend her back perhaps. She just felt less vulnerable facing her attacker, where she could see his next move. He barreled straight at her. And for all her training in martial arts, she did the one thing her dad always said never to do. She ducked her head and hid her face with her hands. Hands out, as if she could fend off this vicious attacker merely with the soft skin of her palms.
Maya felt the heat before she saw it.
Byron was on fire. A living column of shimmering orange flames. She couldn't breathe. Was afraid to breathe. How did that happen? She glanced around the bathroom as panic filled her veins, her fear taking on a whole new level of hysteria. She had to put the fire out.
She turned to the faucet to fill her hands with water. And froze. In the mirror she saw the burning reflection of Byron disappear. Byron was there one moment and gone the next. Only a few burnt shards of fabric left to say he was ever there. But she remembered the last thing she'd seen before Byron became nothing: brilliant blue eyes turning a frighteningly blood-red.
And Nik, holding the doorknob, staring at the empty space on the floor behind her.
About the author
I have been a writer from the time I was old enough to recognise that reading was a doorway into my imagination. Poetry was my first foray into the art of the written word. Books were my best friends, my escape, my haven. I am essentially a recluse but this part of my personality is impossible to practise given I have two teenage daughters, who are actually my friends, my tea-makers, my confidantes… I am blessed with a husband who has left me for golf. It’s a fair trade as I have left him for writing. We are both passionate supporters of each other's loves – it works wonderfully…
My heart is currently broken in two. One half resides in South Africa where my old roots still remain, and my heart still longs for the endless beaches and the smell of moist soil after a summer downpour. My love for Ma Afrika will never fade. The other half of me has been transplanted to the Land of the Long White Cloud. The land of the Taniwha, beautiful Maraes, and volcanoes. The land of green, pure beauty that truly inspires. And because I am so torn between these two lands – I shall forever remain cross-eyed.

www.shelfari.com/tgayerauthor
Posted by Stacey at 6:49 PM