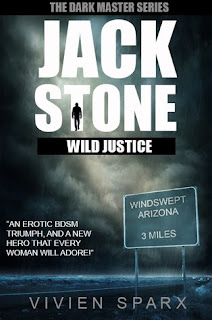 Review- Stepping away from the general erotica genre, Vivien has created something quite original with a very intriguing storyline.

Jack Stone, is a man on a mission to find his long lost sister. His research so far has led him to believe that she has possible been trained and sold as a sex slave and his dedication and love for her has made him learn everything about what makes a BDSM master. So with his insight into that world joined with his previous line of work, he has turned himself into one sexy, irresistible bad-ass out for justice.
I love the concept of this story. I love that it's not your typical thriller and not your typical erotica. There is more to the story then just sex. It kind of reminds me of a Bruce Willis movie, Hostage maybe? Awesome fighting scenes, knee-caps being broken, building being set on fire, don't mess with Bruce! Or should I say, don't mess with Jack!!
Now while I loved the storyline I did find it hard to make a connection to some of the characters. Now I have discussed this with Vivien and we found that it is because of her change of writing style for this book. She wanted it to be more "masculine" to both set the scene for Jack and his story and to draw in more male readers which makes total sense. It is also because she wants to keep Jack a mystery and give her readers little bits about him as the book series progress. This is a very smart thing to do. It keeps the readers intrigued and hanging for more.
Author Interview

Bestselling author Vivien Sparx talks about her amazing new hero, Jack Stone in the lead-up to the release of one of the year’s most anticipated books; ‘JACK STONE – WILD JUSTICE’.

Question: I noticed there is another Jack Stone book called ‘Jack Stone – Deadly Revenge’ on the Jack Stone fan page. Any idea when that book will be published?

I am hoping to have ‘Jack Stone – Deadly Revenge’ ready for publication at the end of July. That means about one month in between titles. Ideally I would like to keep that kind of pace going.

Question: Jack Stone seems very different from the other ‘book boyfriends’ being written about over the last few years. Was that a deliberate
decision?
Yes! I deliberately did not want Jack Stone to be another damaged, troubled, dark, emotional, shattered, wrecked, lost….  soul! He doesn’t need fixing. He doesn’t have any real emotional problems. He is a man on a mission, and he’s not haunted by some deep dark emotional secret. He’s a tough guy, but he’s got his ‘shit sorted’. He knows exactly who he is and he doesn’t care if people like him or not. He’s not out to impress, and he’s not out to please anybody. He’s a man on a mission and he’s exactly the opposite of all the other book characters going around at the moment.

Question: You keep referring to Jack’s ‘mission’. Care to explain?

No! It will all become clear when people read ‘Jack Stone – Wild Justice’. This book sets out what Jack Stone is all about. It shows his tough side, his determination, his alpha-male sexy side(!) and a lot of his personality. I think readers will get a sense of who Jack Stone is and what kind of a man he is. In future books, more and more of his background and personality will be revealed.

Question: ‘Jack Stone – Wild Justice’ sets up the series to take place on a very wide landscape – literally all of America. Was that part of the plan?

Yes! I was tired of writing (and reading) about billionaire’s and virgins. There is only so much that can be done with those kind of characters! Jack Stone is totally different! You won’t find Jack wearing a suit, or undressing some naïve virgin in the back of a limousine or on a boardroom table. Jack is a man’s man and the sort of guy who wears jeans and t-shirts. The series is deliberately set in such a way that doesn’t confine the character – that lets him move from location to location and storyline to storyline.

Yes. Absolutely. He’s a tough, hard man with an absolute sense of moral justice. If he sees something wrong he will get involved. If he sees something that needs fixing he will step in. Writing the kick-ass action sequences were almost as much fun as writing the sex scenes! Jack will not take a backward step when it comes to conflict. But he’s no fool. Jack is smart, clever, and educated.
Jack Stone- Wild Justice will be available for purchase world wide on the 30th of June 2013.
You can purchase Jack Stone through this link:
AMAZON
For more information about the Jack Stone series check out the following links:
FACEBOOK
GOODREADS
For more information on Vivien you can stalk her FACEBOOK page.
HAPPY READING!
Posted by Renee Booth at 5:38 PM