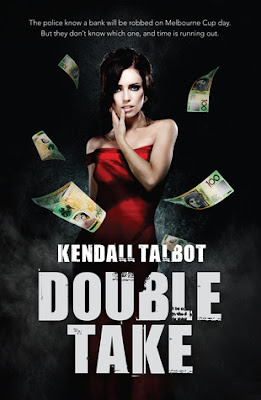 A fresh, fast-paced cocktail of a heist, a good cause and some seriously unexpected consequences…

Jackson Rich is an unlucky man – he’s lost his job, his house and it looks like he’s going to lose the love of his life. To buy his terminally ill wife Candice more time, he’ll try just about anything. Including robbing a bank, on the one day of the year everything shuts down: Melbourne Cup day.

To do it, Jack has to call in a promise from his old gang. It’s been a long time since they were all together, but they would do anything for him – at least that’s what he’s banking on. Nothing could possibly go wrong. Until a couple of kids overhear Jack and his gang planning the robbery, that is.

Even after thirty-odd years as a cop Detective Steel has never been presented with a scenario like this, but he has to act upon the tip-off he’s been given. Somewhere in Brisbane, sometime during the running of the 1992 Melbourne Cup, a bank is going to be robbed. But to catch the thieves, Steel must let the heist happen. He’s about to make the quickest bust in history. What could go wrong?

Who is your literary hero?

Harry Fletcher from The Eye of the Tiger by Wilbur Smith, 1976 is a hero that stands out for me. Having read this book a dozen or so times, I think Harry and I are fairly well acquainted.
Harry is a no nonsense guy who has moved on from his chequered past, to live a comfortable life running his own fishing charter business. His favourite end of day pastime is appreciating beautiful sunsets while sipping his favourite beer. Harry dedicates his life to helping those who can’t help themselves. He’s witty, patient, and thoughtful, has an impeccable sense of justice and will do anything to protect the people he loves… my kind of hero.

Can you tell us a little about your new novel and the inspiration behind it?
How far would you go to save the person you love? This question gave birth to my upcoming crime novel Double Take.
Jackson Rich was a happy man. He had a job he loved, a beautiful home and a wife he absolutely adored. All that crumbled to pieces when his wife was stuck down with a life threatening condition. But Jack can’t spend another minute on the hospital waiting list. It’s time to take matters into his own hands. He devises a plan to rob a bank. Because if the cash he nets saves his wife from certain death then he’ll bloody well do it.
Jack calls in an ancient promise. A debt, if you will, from his childhood friends. It’s been twenty years since they were all together, but the three of them would never forget him, not after the sacrifice he’d made for them all those years ago. At least that’s what Jack was banking on now. Nothing could possibly go wrong. Until a couple of kid brothers overhear Jack and his mates planning the robbery. From that moment on, nothing is as it seems.
Double Take is a gritty urban crime thriller set in Brisbane in 1992. This was a fabulous era to write in. There were no mobile phones, no internet and therefor no google. It was a time of Cheers, boom boxes and game boys. It was before Kentucky Fried Chicken became KFC and car windows were still wound by hand.
1992 was also the year I worked for the National Australia Bank in Brisbane. One particular branch stood out as the one most likely to be robbed because of its poor layout. Back then we didn’t have pop up security screens on the counter, or police monitored alarms. When we pressed the distress button under the counter, it went to the manager, who sat at the back of the branch in his secure office well away from any action. Thankfully I never experienced such horror, but I know plenty of people who did.
So I’ve drawn on my experience in the bank, thrown in my quirky Australian humour, added the technology limitations of 1992 and explored the interesting question of ‘just how far would you go to save the person you love’. Put this all together and I bring you Double Take.

I’d get more writing done... If my cute little Multese/Shih Tzu (multi-shit) puppy, Josie McLuvin, didn’t give me so many opportunities to procrastinate. She’s completely adorable and totally frustrating at the same time. Oh, of course, giving up my day job would give me much more time to write too.

How would you cope with watching the love of your life slowly dying? When all that was needed was a simple operation, but not having the funds to pay is the real killer. This is what Jack Rich is dealing with right now. With no money and no health insurance, Jack feels that his only other option is to do the unthinkable, and rob a bank. And what better day to pull off this heinous crime than on the one day that stops the Nation, Melbourne Cup Day. He sets his plans in motion not realizing that two little pairs of ears were listening to everything. He never knew that those two little boys and their hideout would change his life forever, but would it be for the better or worse?

This story has a few unexpected surprises up it's sleeve. I loved the different POV's, helped me connect better to the characters. But with some chapters I did find myself a little confused with which POV I was hearing from, it would've been great to have names on the chapters to help out with that part. Aside from that Talbot brings such vivid details I felt like I was back in 1992 watching all this unfold.

Talbot has produced a fast paced, entertaining story, with engaging characters, suspense and heart felt emotion. I recommend this story to anyone looking for something different and fun!