The job seems simple enough at first: go undercover and catch her best friend’s killer. But psychic detective Denieve Knight gets more than she bargained for when she enters Dr. Braeden Frost’s estate as a “housekeeper.”

She's supposed to be sleuthing, not falling under the spell of the enigmatic doctor and his irrepressible, hellion of a brother, Xavier.

Now after two months of working for the man known as “Dr. Death,” she's entangled in a web of secrets and lies. Each discovery only leads to more questions. Though faced with declining health and a storm of confusing feelings and simmering passion for both brothers, Denieve is determined to uncover the truth---consequences be damned. Yet the truth may prove deadly once she discovers just how deep the rabbit hole goes. 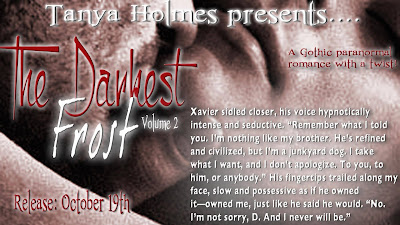 CLIFFHANGER: **YES** This is a two-part serial.

When the ghost of her best friend begs for her help, psychic detective Denieve Knight goes undercover as a live-in domestic to catch a killer. She sets her sights on the most likely suspect: her friend’s mysterious employer, Doctor Braeden Frost.

Dubbed "Dr. Death" by the press, the notorious hematologist is linked to nineteen other suspicious fatalities—all are former patients. The brooding recluse is a man of many secrets, the darkest of which may be lurking beneath the leather gloves he never removes.

Amazon Bestselling Author Tanya Holmes is a Golden Leaf double-finalist, a Romance Writers of America Golden Heart finalist, a recipient of the Maggie Award, the MICA Award, as well as Overall Winner of the Sandy Haddad Award and a two-time finalist and one-time winner of The Emily (Best of the Best). She's happily married with children and loves reading, writing and a good cup of coffee---but not necessarily in that order. She has two novels coming out in 2015: The Darkest Frost, a two-part Gothic paranormal serial romance with a twist, and in 2016, Temptation's Edge, a contemporary romance.