Hey all, welcome to day 5 in the Valkyrie Invasion Week. We've been sharing all the books in the Runes series by Ednah Walters with you. An amazing series that NEEDS to be read!!!
So far we've shared, B1 Runes, B2 Immortals, B2.5 Grimnirs, B3 Seeress and today we're sharing Grimnirs B2, Souls. Each post has a little added bonus just for fun. ^_^ You can scroll down to catch the other posts or you can click the titles above. At the end of the week we'll be having a big giveaway so that's not to be missed.
Souls
(A Runes Novel, Grimnirs, #2)
By Ednah Walters
Release Date - 29th September 2014
Published by - Firetrial Publishing 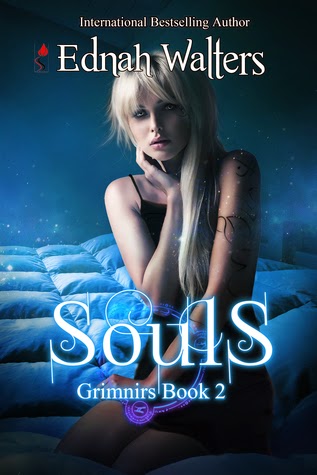 WARNING: This is CORA'S story: This book may be considered NA (new adult) because it contains some swearing, violence and sex scenes: Suitable for ages 17 and up. A Clean Version will also be available on Amazon.

Eighteen-year-old Cora Jemison knows what it’s like to date a soul reaper. There are no Friday night movies, no school dances, and no stolen kisses between classes. It totally sucks! What makes it even worse, souls pop up when she least expects it. The last one is not her fault, but it all adds up to zero quality time with her super hot, scythe-carrying boyfriend, Echo.

Since Cora was etched with special runes by an evil Immortal, she understands why souls are drawn to her. She makes the best of it by helping souls find closure while Echo escorts them to the realm of the dead. Perfect partners, until a dark soul visits Cora in the dead of the night and Echo decides her soul-helping days are over.

Cora can either listen to Echo or follow her instincts. To make matters worse, other reapers start stalking her, demanding she hand over the soul. Even her Valkyrie friends think she’s gone too far. But something sinister is coming their way, and the soul is the key to saving her town, her friends, and her relationship with Echo. Can she convince Echo to see things her way before it’s too late?
ADD ON GOODREADS
Purchase
Amazon | Amazon AU | Kobo | Barnes & Noble


You can check out my review for Souls HERE
Ednah Walters
EDNAH WALTERS grew up reading Nancy Drew and the Hardy Boys and dreaming of one day writing her own stories. She is a stay-at-home mother of five humans and two American short-hair cats (one of which has ADHD) and a husband. When she is not writing, she’s at the gym doing Zumba or doing things with her family, reading, traveling or online chatting with fans.
Ednah is the author of The Guardian Legacy series, a YA fantasy series about children of the fallen angels, who fight demons and protect mankind. AWAKENED, the prequel was released by Pill Hill Press in September 2010 with rave reviews. BETRAYED, book one in the series was released by her new publisher Spencer Hill Press in June 2012 and HUNTED, the third installment, was released March 2013. She’s working on the next book in the series, FORGOTTEN.

Ednah also writes YA paranormal romance. RUNES is the first book in her new series. IMMORTALS is book 2. She just released book 3, GRIMNIRS December 2013. Read more about this series and the world she's created on this website.
Under the pseudonym E. B. Walters, Ednah writes contemporary romance. SLOW BURN, the first contemporary romance with suspense, was released in April 2011. It is the first book in the Fitzgerald family series. Since then she has published five more books in this series. She's presently working on book seven. 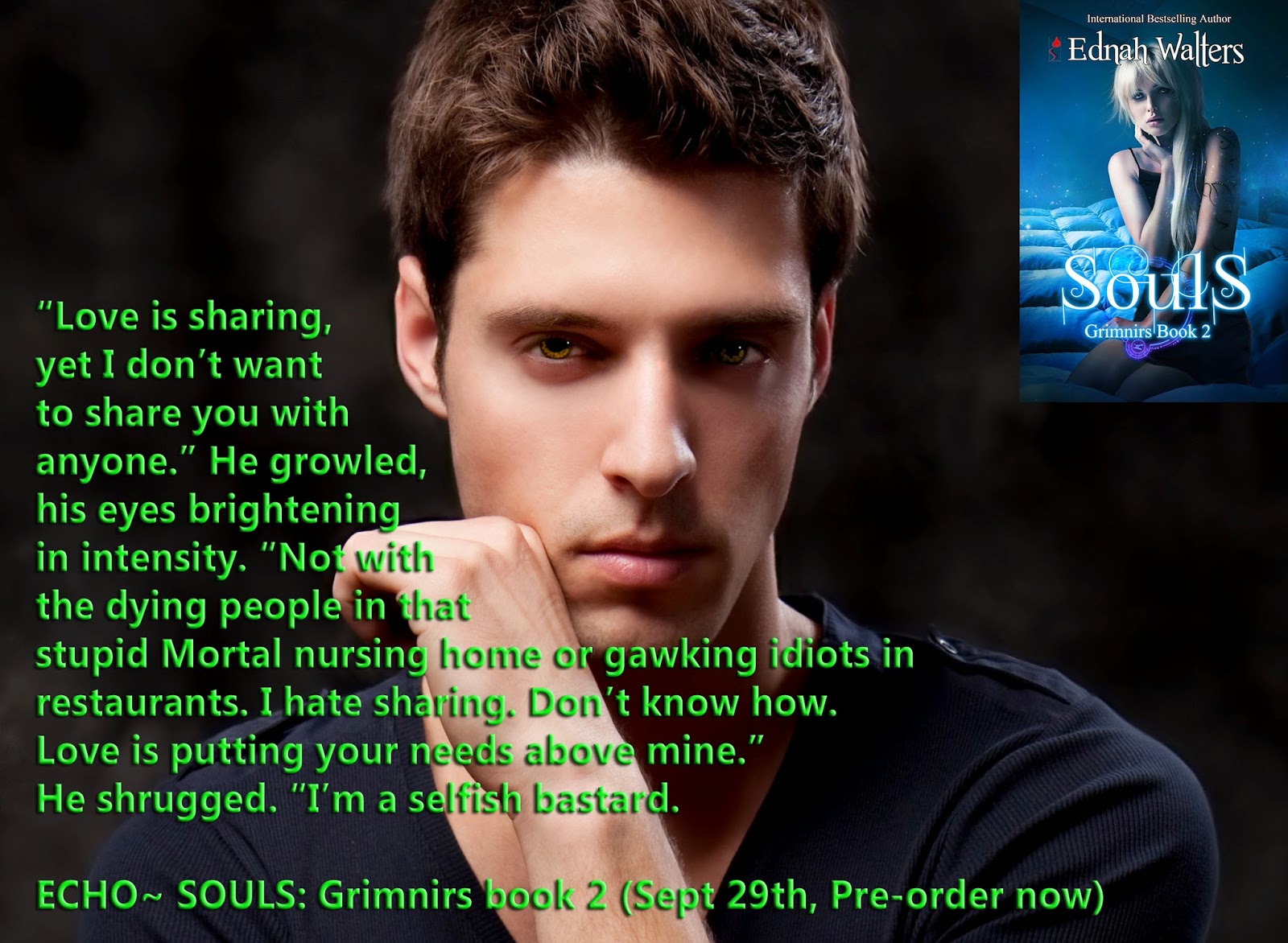 Stacey: Is there a nickname that you're known by? Do you prefer it?
Echo *cocks his right eyebrow*: Do you really think someone would dare give me a nickname? I’m Echo. End of story.
Stacey: What is your height, weight and build?
Echo: Seriously? Why would anyone want to know my stats?
Stacey: I’m the one asking questions here, Echo, so play nice and answer them.
Echo *grins*: Oh, a spunky Mortal. I love that. Six-five, tall, all muscles. *Pulls up his shirt and bares his washboard abs* Want to touch?
Stacey “blushes*: I don’t think Cora would approve. Do you have any scars, tattoos, piercings? What do they mean to you?
Echo *stands and pulls off his shirt to show his back*: Scars, a constant reminder of my dark past and my dark soul. Cora calls them badges of honor. She’s a total sweetheart. *sits down*
Stacey: You love her?
Echo *sighs, a faraway look in his eyes*: Love is too tame a word. I adore her. She’s my anchor, my harbor, my crutch when the world is off kilter. She completes me.
Stacey: Wow, lucky girl. What is currently your biggest responsibility/commitment?
Echo: Cora and reaping, in that order.
Stacey: Really? What will your goddess say if she hears that?
Echo *shrugs*: I don’t care. Probably throw me on Corpse Strand to remind me she’s the boss, but I’ve come to learn that there are other things worse than torture.
Stacey:  Like?
Echo: Seeing Cora unhappy
Stacey: Who is your biggest rival/enemy? Describe them briefly.
Echo: Enemies, hmmm. Too many to count. Most of them are my fellow Grimnirs. In my defense, I really don’t consider them my enemies. They are the ones who consider me their enemy. As for rivals, I used to think a certain god-child was my rival. I’m his opposite in every way. He’s fair while I’m dark. He’s golden hair, pretty face, and pampered existence while my story is out there for all to see and it’s not pretty. But he’s no longer my rival. I won. I got the girl. *smirks smugly*
Stacey *chuckles*: What is your favorite food, drink, musical artist, song, and movie/play?
Echo *closes his eyes*: Pies. Cora’s mother makes amazing pies. I don’t drink, but I like my coffee black and unsweetened. Songs? I have an eclectic taste in music. Some Classical rock. Some heavy metal. Some pop. I don’t watch movies. Don’t have the time.
Stacey: How deeply does your job/social role define you as a person?
Echo: What I do doesn’t define me. My past may have shaped the man I’ve become, but what defines me comes from here. *taps his chest* My essence.
Stacey: What do you dislike most about your life? What is missing?
Echo: Hel. The place is colder than dry ice. Now that I have someone to warm me up when I come back, it’s not so bad.
Stacey: What is the driving force/motivation in your life?
Echo: Doing right by those I love. It’s gotten me in more trouble than I care to admit, but that’s who I am.
Stacey: What is your biggest character defect?
Echo *grins*: I’m a vindictive bastard. You hurt someone I love and I’m a coming after you. It doesn’t matter how long it takes or who I have to go through. I will make you rue the day you hurt those I love.
Stacey *shudders*: I hope I never piss you off. How hard is it for you to admit when you're wrong?
Echo: I have no problem admitting I’m wrong. Rather face the music right away than stress about it.
Stacey: Do you consider yourself a moral/ethical person?
Echo *shrugs*: I’d like to think so. Don’t take my word for it. Read my story and decide for yourself.