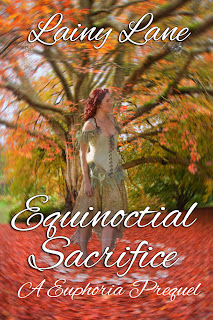 What would you sacrifice for the life of your child?
Hollyn is faced with this very question when she gives birth to Calandra alone in the woods at only 7 1/2 months. Hollyn suddenly finds her new daughter’s life hanging in the balance when Akiye, the faerie of the autumn equinox, offers her a lifeline in exchange for saving the life of her newborn daughter. Now Hollyn must leave everything behind, including Calandra, and return to Faerie to set things up to ensure her daughter can fulfill her destiny and fix the things in the world that her own family has been screwing up for generations now.
Will Hollyn be able to ensure her daughter is the one to put a stop to the cycle, or will something else take all of her energy and use her up in the process?
Destinies set into motion, wills are tested, and lives are changed forever in this prequel to the Euphoria series.

Life is a fragile thing, not only in the mortal sense. It’s like a big glass ball waiting above your head, and sometimes one simple thing can send the glass crashing down around you into a million tiny pieces. All you can do when this happens is stand by and watch as the pieces of your life fall, shatter, and settle around you. You have two choices: You can try and piece them back together one by one. Or you can start all over and try to build a new one. Hopefully a better one. Somewhere in between those two options is where you find the person you’re actually meant to be. The person that’s somehow strong enough to take destiny face on, no matter how impossible that may seem.

Calandra thought she lived a normal enough life. She fought constantly with her dad, like any other teenage girl. She had a boyfriend that she knew was it for her. School was coming to an end, and she was going to have all summer to spend with Tristan, while her father was out of town. it doesn't get much better than that. But when a stranger comes to her in a dream, life takes an unexpected turn. Calandra is thrown into a whirlwind where she discovers the heritage her father has been hiding from her for years, learns of a whole new world, and finds that destiny doesn't always hand you the life you dreamed of. Now, the question is- can she handle it all? Will she accept what she's meant to be?

In the first installment of the Euphoria series, Field of Innocence shows us that not all Faerie tales start with once upon a time or end with happily ever after. Sometimes Destiny is far too dark to give us a normal faerie tale!


Amazon
Excerpt
“Think back to a few years ago, when you were younger, before the weight of the world and reality hindered your judgment. All humans believe in everything when they are younger and somewhere along the way, they allow something to change them. They allow life to make them harsh and prevent them from believing that certain things can
exist because they are too beautiful. If you still had that mentality now, that innocence, that beauty in your beliefs, how would you feel knowing what you know now?”
Calandra tries to imagine herself as a few years younger walking through her sanctuary and coming across Jarreth. She thinks of how she might have reacted to hearing the story about her mother and Echo and Faerie. She tries to think of feeling this amount of power and emotions and pressure at that age and suddenly a grimace crosses her face.
“You see the issue now dear?”
Calandra nods slightly and stares directly at Jarreth. “I think so.”
“If you had that innocence still, you would believe without doubt, and you would know to let your instincts take over to make your decisions. You would allow yourself to feel what your heart wants you to feel right now. But at the same time, it would be way too much for you to handle. You have to find a middle ground, love. Something between having the ability to allow yourself to believe and feel what you know you should.” Jarreth places his hand on her chest. “Don’t be afraid to let it break you down, Cal. If it does then it does, and you know what you do then?” His eyes seem to glitter as he stares at her.
“No.” The word is barely audible as it leaves her mouth.
“You rise again. You take the ashes that remain and you become a Phoenix, you start over. And I’d be willing to bet that the outcome would be extraordinary. In fact, I know it would be.” 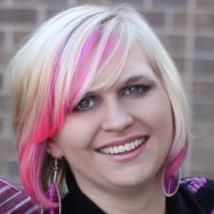 Lainy Lane is a 27-year-old mother of 2 beautiful girls, one of which is now the family guardian angel. She has a wonderful husband that is a large part of the reason she is where she is today. She has always had an obsession with fantasy worlds. When she was younger, she always said that Peter Pan would be the perfect man because when things got rough, he could whisk you away to Neverland, where all your problems would simply disappear. As she grew up, she learned the harsh reality that life can be cruel, and no world (even fantasy ones) is completely without issues and that was when her love for writing really grew. She has always written in some form or fashion, starting out with poetry and song lyrics. She’s always had a story in her head and voices talking to her. Thanks to lots of motivation from her husband, a wonderful laptop with a word processor, more hours than she could ever count, lots of sweat, blood, and tears, and a wonderful woman with an awesome little publishing company believing in her, she has finally managed to watch her dreams become a reality.