Heart Of Darkness by Felicity Heaton

Heart of Darkness, a vampire romance book by Felicity Heaton – Just $0.99 until April 28th
Heart of Darkness, a stand alone vampire romance novel by Felicity Heaton, is on offer for just $0.99 / £0.99 / EUR 0,99 until April 28th. That’s a saving of $3 on the normal cover price of this paranormal romance ebook. This bargain deal is available at all Amazon Kindle, Kobo and Apple iBooks Stores.
Heart of Darkness was an Epic Ebook Awards 2013 finalist in the Paranormal Romance category.
Read on for the blurb and links to where you can grab this discounted novel. 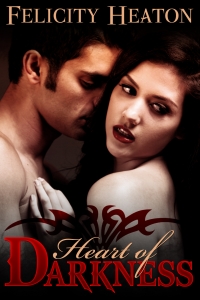 A vampire prince on a four hundred year old mission to avenge his murdered sister...Aleksandr Nemov won’t stop until the last of the vampire hunter’s progeny is wiped from the Earth. Each kill has stolen a piece of his humanity, pushing him towards the black abyss all vampires hold within their hearts. Now he is teetering on the edge, close to devolving into a beast, and time is running out as he tracks the last hunter to Prague. There he finds a beautiful woman who could be his one chance for salvation, but is it already too late for him?A vampire guard who will do whatever it takes to protect those she loves...Elise is dedicated to her duty. It’s the only thing she has left. All that changes when she meets Aleksandr in Prague and her master grants him permission to stay at her bloodline’s mansion. She knows all about Aleksandr but none of it prepares her for how she feels when the legendary prince’s hunt becomes one for her heart. Elise battles him with all of her strength but can she stop herself from falling for the handsome hunter? When he reveals the depth of the corruption in his soul, will she have the strength to face the pain in her past and do whatever it takes to save him?
ADD ON GOODREADS

This offer is available at:
Amazon Kindle Stores, including:
US / International site | Canada | UK