Welcome to our stop on the Elixxir blog tour, we're one of the additional stops ;-)
The Brethren Series has to be one of my favourites along with Deena Remiel as one of my fav Indie authors. Believe me, if you don't believe in Angels you will after reading these phenominal stories, Deena truly brings them to life!
So if you haven't read these books than I recommend you adding them on your tbr pile, they're so worth it. You've heard the phrase "Touched by an Angel" right? That says it all. *winks*
Now I present to you the third installment in the Brethren series...
Elixxir
(Brethren #3)
by Deena Remiel
Released: 6th March 2013
Published by: Decadent Publishing 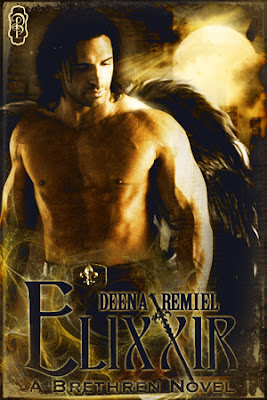 Guest Post from Deena Remiel
Tools of the Trade for Nathanael, Brethren Warrior
So, what exactly does a Brethren Warrior use for tools of his trade? Well, Nathanael has a few weapons at his disposal. First, he has a Baretta that he uses for his bounty hunting. Many times, however, bounty hunting and Brethren angel duties mesh, so he also uses his ritualized sword to mete out Brethren justice. He also has the ability to shield himself so that he can move around undetected. His superhuman hearing and quick reflexes aides his ability to respond to threats or aggression.
A lesser realized weapon is his well-hewn body and charm with women. He never had time for women before. He doesn’t have time for them now, either. But there’s something about Callie Worthington besides what he’s been tasked to retrieve from her that brings out the best in him. She drives him crazy most of the time, but there are other times… well, she brings out latent qualities in him that endear him to her and vice-versa. Read for yourself…
Here’s a tease:
Callie has secrets, too many to count.
For twenty years she’s been living a lie as Callie Worthington, hiding from the monsters who brutally murdered her parents for possession of the Elixxir of Life. Unsuccessful before, their killers have found her and will stop at nothing to acquire the Elixxir. And see her dead.
Nathanael has a couple of secrets, too. A nasty one in particular blurs the line separating Good from Evil. As an immortal Brethren Warrior, though, he must retrieve the Elixxir before it falls into the wrong hands. Just how he’s going to get it out of Callie’s is the big question.
Tempers flare and passion ignites as Callie and Nathanael reach out to each other with their own hidden agendas. She needs his protection. He needs the Elixxir. Will their fiery passion lead to lasting love, or will their web of secrets and lies ultimately destroy them both?
Secrets, lies, and love’s loyalties tested. What price for immortality? What price for love?

How about an excerpt to whet your appetite even more:
“Before you fall asleep there, what’s your real name?”
“My real name?” Her eyes remained closed. “I…I don’t think I can say it out loud. I whispered it just yesterday and nearly had a coronary.” Her eyes opened. “I’m scared.”
Nathanael approached the cocooned lump on the bed. He knelt to caress her hair. “Why don’t you whisper it to me, then? It’s only you and me here, no one else. No one is gonna come charging in as soon as you say it. Okay? A small whisper for me, that’s all.” He watched as fear gripped her tighter than the bed sheets, and then subsided slowly as she nodded and closed her eyes.
“Come closer. Give me your ear,” she croaked.
He leaned in so her lips nearly touched it.
“Ariana. Ariana Kupi.”
No louder than a ghost’s breath, she said her name, and he sensed years of pent-up anguish and terror. It pierced straight through to his soul, and he had no choice but to collect her in his arms and hold her. Hers trembled as she wrapped them around him.
“Shh. Shh. It’s okay.” He softly stroked her hair and murmured against her neck. How he knew what to do, he hadn’t a clue. He’d never consoled or comforted a woman before. But it seemed right, and she smelled so good, he continued. “It’s done. It’s finished. Only you and I know. Rest now. I’ll keep you safe.” 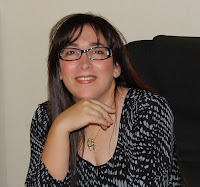 It was the mystique of Arizona’s history and landscape that called to Deena and catapulted her career as an author. When she’s not writing romance and urban fantasy in the wee small hours of the morning or in the deep, dark of night, Deena teaches language arts to middle school students. She currently lives in Gilbert, Arizona with her husband and two children, but New Jersey will always tug at her heartstrings. She loves connecting with her fans, so find her at deenaremiel.com.
You can stalk the gorgeous Deena in these places...
Website | Facebook | Twitter | Decadent Publishing
Thanks for stopping by.
Saw this quote on a site and had to share it with you...
In every Heart...awaits Your Angel. ~Michael, @WhereAngelsCome