Release Celebration PLUS Giveaway!- It Started With a Kiss by Christina McKnight

It Started with a Kiss features twelve sweet to sexy Regency romances from
award-winning and bestselling historical authors. 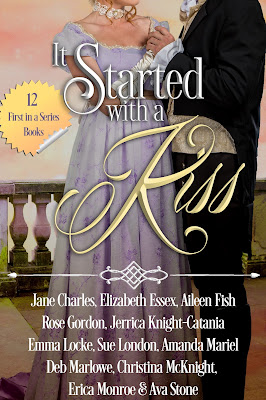 IT STARTED WITH A KISS... Twelve First In Series From Stars of Regency Historical Romance!  Enjoy dashing dukes, reformed rakes, and scandalous bluestockings in this sweet to sexy boxed set.

MAD FOR LOVE by Elizabeth Essex
Mignon du Blois needs an accomplished thief to steal back her father's statue so he won't be arrested for forgery--too bad the man willing to help her is actually Rory Cathcart, noted art expert.
A SCANDALOUS WIFE by Ava Stone
After living separate lives since their rushed wedding, an earl and countess stumble upon each other and begin to see the other in a whole new light.
TRIALS OF ARTEMIS by Sue London
An independent bluestocking sneaks into a library to read rare Greek texts and ends up with a husband instead.
HER SUDDEN GROOM by Rose Gordon
The overly scientific, always respectable, and socially awkward Alexander Banks has just been informed his name resides on a betrothal agreement right above the name of the worst chit in all of England. With a loophole that allows him to marry another without consequence before the thirtieth anniversary of his birth, he has only four weeks to find another woman and make her his wife.

THE ROBBER BRIDE by Jerrica Knight-Catania


Victoria Barclay is determined to make a difference in the world, so she finds a way to rob the rich and donate to the poor. But the Earl of Leyburn, her lifelong friend and neighbor, threatens to expose her in his constant pursuit of the truth.
SHUNNED NO MORE by Christina McKnight
Lady Viola Oberbrook longed for a quiet life in the country, far from London and the society who'd shunned her during her first season. She never expected to come face-to-face with Lord Haversham, the only man who had every right to despise her.


A DANGEROUS INVITATION by Erica Monroe
Struggling to survive in London's dangerous rookeries, Kate Morgan is determined not to give into the temptation of past love Daniel O'Reilly when he returns to win back her heart and prove he's innocent of murder.

THE TROUBLE WITH BEING WICKED by Emma Locke
Courtesan Celeste Gray wanted a new life free of the infamy of her notorious past--the last thing she planned on was falling for the stuffy viscount next door, Ashlin Lancester.

HIS IMPASSIONED PROPOSAL by Aileen Fish
Stephen Lumley returns from battle wounded and jaded, only to find his home life had been changed forever. After proposing while drowning his sorrows in liquor, he now has only four months to convince himself and Jane Marwick he is worthy of her, before she's off to London to find a man who is.

SCANDALOUS ENDEAVORS by Amanda Mariel
Lady Amelia's willing to create a scandal to stay in her beloved England. A Scottish duke ignites her passion, but will she abandon her endeavor for love?

THE LOVE LIST by Deb Marlowe
Miss Brynne Wilmott will do anything to get her name off of the Love List—that wickedly witty register of London’s light skirts.  The Duke of Aldmere will do anything to be left alone.  But his brother is mixed up in the business, so he’ll work with the lady to unravel the mess…until they find that the plot is more twisted and treasonous than anyone suspects…and that the danger and intrigue pale next to the effect they have on each other.

TO WALK IN THE SUN by Jane Charles
Hiding from a dangerous man, Tess Crawford thought The Wiggons’ School for Elegant Young Ladies would be the perfect place to disappear…except she didn’t anticipate being drawn to the reclusive Viscount Atwood, who has many secrets of his own.
Available at: Amazon | Barnes & Noble | Kobo | iBooks