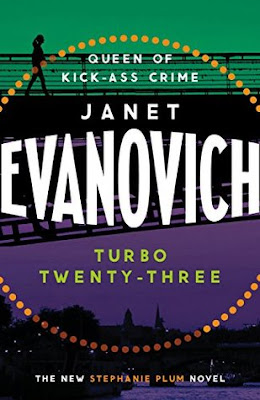 A killer is out to make sure someone gets his just desserts...

Bounty hunter Stephanie Plum has been on countless crime scenes, but this is definitely a first. Her fleeing target has left behind a truck loaded with ice cream and a dead body - frozen solid and covered in chocolate and chopped pecans.
As fate would have it, Stephanie's mentor and occasional employer, Ranger, needs her to go undercover at the ice cream factory to find out who's killing employees and sabotaging the business. It's going to be hard for Stephanie to keep her hands off all that ice cream, and even harder for her to keep her hands off Ranger. It's also going to be hard to explain to Trenton's hottest cop, Joe Morelli, why she is spending late nights with Ranger...
Stephanie Plum has a lot on her plate, but for a girl who claims to have 'virtually no marketable skills', these are the kinds of sweet assignments she does best.

This is my first book from Janet Evanovich and I really enjoyed it. This is part of a series and can be read as a standalone but it's definitely intrigued me to read the other 22 books. Yes, 22! (Love finding a series with so many books lol).

I found the story to be a fast paced, fun, humorous read with interesting and well developed characters.
I loved trying to figure out the killer with Stephanie.

If you love crime novels with a bit of sass and fun, I recommend picking up a copy of this book. :-)