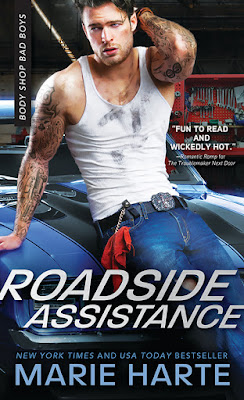 Underneath the axle grease and tats

Foley Sanders figured he’ll always be content with a life of cars and casual hookups. Until a run-in with Cyn, a statuesque firecracker with a hate-on for men, leaves him bewitched and intrigued—much to her annoyance.

Maybe Cynthia Nichols was a little hard on Foley, that muscular, tattooed, super-hot mechanic next door. But she’s tired of feeling defensive about her size and has sworn off men. She’s got a new job, new life, perfect plan. Foley has trouble written all over him—no way is she going to fall for his charms.

Foley might look like a bad idea, but underneath, he’s all gentleman. Too bad Cyn’s not buying it. What’s a bad boy to do when the goddess of his dreams won’t give him the time of day?

Short black hair framed a handsome face. Rough yet manly. He had a five o’clock shadow, and that rumpled hair look that on her would have appeared messy but on him shouted “sexy”. Bright gray eyes watched her with caution, showing he had a measure of intelligence under all that muscle and ink.
She steeled herself not to get taken in by so much manliness. Neighborhood cat lady, remember? Besides, his cars are littering the parking lot! Men suck. He’s probably only into skinny chicks anyway.
That made her feel better, imagining his intolerance for real women.
But real women can be any size. Plump or stick thin, fat or slender, tall or… Shut up, Cyn! This isn’t time for a life lesson. Deal with Conan and love your gender later.
“Yes?” she said with an icy politeness that had Nina trying to bite back a grin.
“I’m sorry. I think we got off on the wrong foot.” He smiled, but she wasn’t buying the charm. “I’m Foley Sanders.” He held out a hand.
Nina stepped on her foot, and she jerked toward Foley before realizing it. She glared at Nina before reminding herself to be a professional. She’d dealt with overwhelming men before and would no doubt again. So she held out her hand and pasted a smile on her face. “Cyn Nichols.”
He blinked. “You’re related to Matt?”
“Yes, is there a problem with that?” She didn’t even have to pretend to be tired of that question. Matt was so handsome and in shape and popular. What tree had they shaken her out of?
“Not at all.” His grin broadened. “I just hadn’t realized Matt had such a hot sister.”
She blinked. “What?”
“Before I somehow piss you off again, I’m here to get the cars,” he said in a hurry. “Dale, our new guy, must have parked them in the wrong spot. Apparently our agreement was with the sewing place next door, not your parking lot. And I’m sorry I never answered your calls. I misplaced my phone again.” He gave her a disarming smile that—damn it—worked.
She felt herself blushing. “Oh. Sorry if I came on a little strong.” A little? Even she knew she’d been over-the-top bitchy. “It’s just that we had some complaints with customers and I couldn’t understand why no one had gotten back to me.” She still didn’t understand that. What professional these days ever parted with his or her cell phone? But he’d made amends, so she could forgive him the lapse. “So you’ll move the cars?”
He held up a ring of tagged keys. “Right away, Ms. Nichols.”
“How do you know I’m not a Mrs.?” she asked, annoyed with the assumption. Was she so unattractive and ungainly she couldn’t land a man?
He had the gall to wink and nodded to her hand. “No ring. Trust me. First thing I checked…after that dress. That’s a really, really nice dress you’re wearing.” He let out a small sigh and left before she could think of something to say.
Like I’m sorry for being so damn defensive about my size. It’s not you, it’s me. But then, it’s guys like you who made me this way. Well, you and my mother.
Thoughts of her mother scared her straight. She’d told herself time and time again to stop letting Ella Nichols dictate her feelings about herself. She just needed to follow her own advice.
“Ahem.”
Knowing she had to face the inevitable, she looked at the smug woman standing next to her and groaned at Nina’s wide smile.
“You and Foley Sanders. Oh my God, will you guys have the best looking, tallest babies or what?”

About the author
Caffeine addict, boy referee, and romance aficionado, MARIE HARTE is a confessed bibliophile and devotee of action movies. Whether hiking in Central Oregon, biking around town, or hanging at the local tea shop, she’s constantly plotting to give everyone a happily ever after. Visit marieharte.com and fall in love.