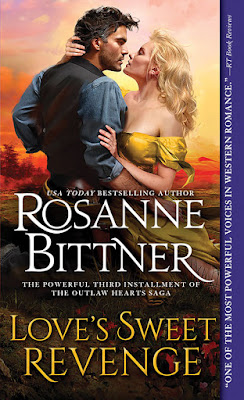 Their Passion Shaped a Nation

Over the years, Jake and Miranda Harkner have endured all the dangers a wild and brutal West could throw at them. Now, settled on their ranch in the beautiful Colorado hill country, they’ve finally found peace. But for a man like Jake Harkner, danger is always lurking, and the world may not be ready for an infamous outlaw-turned-lawman-turned-legend to hang up his guns.

Threatened by cruel men in search of revenge, the Harkner clan must be stronger than ever before. Yet nothing can stop the coming storm. With the Old West dying around them and the rules of this new world ever-changing, Jake vows to end the threat to his family no matter what it takes…

Even if it means sacrificing himself so his beloved Miranda may live.

Jake and Miranda Harkner’s love helped shape a nation and, over the years, they’ve endured all of the dangers a wild and brutal West could throw at them. Now they are sitting down with us to discuss how they’ve made their happy ever after last a lifetime.


Author’s Note: This interview would have taken place in 1896 at Jake’s ranch (the J&L) in Colorado. The interviewer would have taken note that Randy is a tiny, beautiful blond with gray/green eyes who doesn’t look her age at all. Randy is a stark contrast to her husband Jake – who stands six feet four inches. He’s broad and well-muscled, deeply tanned, with thick, dark hair that has tiny streaks of white in it. His dark eyes capture a person right down to their toes.


MIRANDA: Oh, my, there are so many positive aspects to our relationship that has kept it going these past thirty years … and I must say that in spite of all of them it’s been a challenge.


JAKE: (Lighting a cigarette) Challenge is probably the biggest understatement of all time. I am not an easy man to live with and I know it. This beautiful woman sitting next to me has put up with a lot of heartache and danger and hardship because of me and my past. She also knows I sort of go off the deep end sometimes when something bad happens to anyone in my family. That’s hard for her because I can become a different person when that defensive side shows itself.


MIRANDA: Jake grew up in a horribly abusive home where he knew no love, at least not from his father, who often beat him with a belt and who killed Jake’s mother and little brother. At first I had to teach Jake what love was all about, and now he has the family he never dreamed he could have, and we all love him. He treasures that above all things and would give his life for any one of us, especially our precious grandchildren. We have six now.


JAKE: I have kind of a dark side where I go when someone I love has been hurt, or when I feel unworthy of the love my family has shown me … especially Miranda.


MIRANDA: Dark side is putting it mildly. Jake can be extremely ruthless to his enemies, and his enemies are anyone who threatens those he loves. But he’s a gentle, kind, loving man to all of us. Never has he directed that anger he carries deep inside toward any of us, not ever. And that brings us back to why we’ve lasted. Jake adores me and he never fails to tell me or show me. A woman couldn’t feel more loved than the way Jake loves a woman.


JAKE: I was probably the worst thing that ever happened to her. I was a mess when she first met me, a wanted man. I even tried to leave her a few times because I thought she’d be better off without me. She was all beauty and graciousness, educated and sophisticated. I was pretty much the opposite of all those things. When I first met her and knew life would be hell for her if I acted on my feelings, I decided to ride out of her life.


MIRANDA: But he came back for me because he loved me and wanted to try to change his life. He found me near death from a snake bite and he saved my life. He was so gentle and loving … and we knew we couldn’t live without each other after that. I guess you’d say the secret to our relationship is that I fully understand Jake, how his mind works, how desperately he wants to be loved. There is a little boy inside that just wants someone’s arms around him. Jake can be the gentlest, sweetest, most provocative lover on the face of the earth. When we make love it’s not just physical. It’s as though our souls are mingling and our hearts are beating for each other.


JAKE: Randy is my rock. She’s the air I breathe. And I love the fact that she loves that boy inside who is sometimes an emotional mess. She just loves me right through it all, and I don’t desire her just for her outer beauty, but for her beautiful, forgiving, gracious, understanding heart. (Jake takes hold of Randy’s hand.) I never knew about love until I met this woman.


RANDY: And I never knew I’d fall in love with an outlaw. The man has incredible charisma… and just look at him. He’s so handsome! His smile just melts me right to the floor. I can’t say no to him and he knows it.

JAKE: (Jake grins teasingly.) That’s what I love most about you. You try hard to say no sometimes, but you always give in.


RANDY: And you are the devil in disguise, Jake Harkner.


Just as Randy feared, Jake is bound to embarrass her because they’ve just made love in the woods. A bear came along and scared off Jake’s horse. Randy knows the horse will run back to camp and their son and maybe more men will come charging up the hill to see what happened.

“Oh, Jake, this is ridiculous!” Randy quickly pulled on her underwear. She smoothed her dress, then realized her hair was down and a mess.

Jake finished buttoning his shirt. “I brought my beautiful wife out here so we could be alone. So what if her hair is down now?”

Randy sat back down on the blanket and fished for the combs and pins that had fallen from her hair. She quickly twisted the back of her hair up and shoved combs into it to hold the quick up-do in place. She plunked her hat on her head and looked at her husband, who only watched with a big grin on his face.

“Do I look ridiculous?” she asked.

Jake frowned. “Not bad. A few strands of hair are hanging down, and the skirt of your dress is a little more wrinkled in front from being pushed up.”

Randy gasped and looked down.

Randy looked at him. He still had a handsome smile that only made her smile in return. He opened his arms, and she fell into them.

“You are my wife.” He let go of her and held her face in his hands, gently kissing her. “And in spite of not having you fully naked beside me, that felt damn good.” He kissed her again.

They heard a whistle. In the distance they could see Lloyd and one other man riding hard in their direction, the other man leading Jake’s horse behind him.

“Oh, for the love of God,” Randy said as she quickly rolled up the blanket and held it close. “I will never live this down!”
About the author
USA Today bestseller and award-winning novelist Rosanne Bittner is known as the “Queen of Western Historical Romance” for her thrilling love stories and historical authenticity. Her epic romances span the West—and are often based on Rosanne’s personal visits to each setting. She lives in Coloma, Michigan, with her husband and two sons.
Giveaway