**SPOTLIGHT, EXCERPT & GIVEAWAY** How to Rescue a Rake by Jayne Fresina 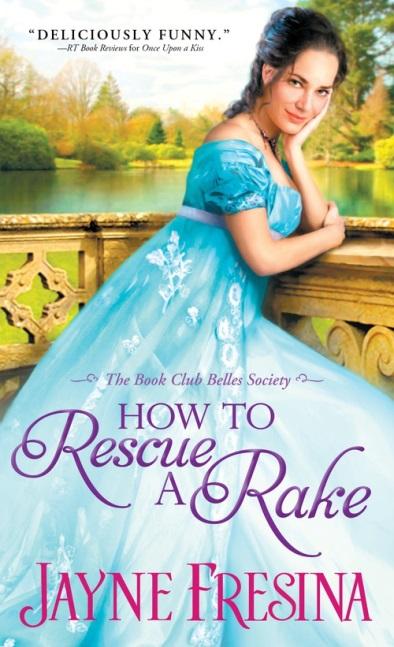 Nathaniel Sherringham has returned to Hawcombe Prior a changed man. Gone is the reckless rake who went out on a limb to propose to Diana Makepiece three years ago. Now Nate’s mysterious new wealth has the town’s rumor mill spinning. To stir things up (and get Diana’s attention), Nate boldly announces his plans to marry “any suitable girl” under the age of 25.

Diana, now 27 and still single, is acutely aware of Nate’s return. When her mother suggests a trip to visit a cousin in Bath, Diana leaps at the chance to escape the heartbreak and regret she can’t help but feel in Nate’s presence…and avoid his irritating charade to find a bride.

But for Nate, Diana has always been the one. He might just have to follow her to Bath and once again lay his heart on the line to win her attention—and her heart.

How to Rescue a Rake, the third in Jayne Fresina’s Austen-inspired Book Club Belles series, comes out this January! For all of you Jane Austen fans, this fun new release is based on Persuasion and it’s a book you don’t want to miss. To celebrate this latest release, the heroine is here to give our readers a tip on how to rescue their own rake and to share an excerpt with us.

Tips for Capturing a Rake's Attention: By Diana Makepiece (Or How to Stay Calm and Capture a Rake)

A tongue-in-cheek guide by one old maid, who has lost her bloom, has let her last chance for happiness pass her by and is now, at twenty-seven, half way to death (according to the parson's wife)... and not at all bitter about it, thank you very much.

Keep a window open as often as you can. One never knows what might come in through it. And fresh air is excellent for a lady's complexion


“I sent you a message the morning I left, Diana,” he said. “I fired it myself through your bedchamber window with a sling.”

He ran a hand over his face, flattening rain-drenched spears of hair to his brow. “I climbed that damnable oak behind your mother’s cottage. I didn’t want to leave without giving us another chance.”

She tried to think, but her mind wouldn’t cooperate. Don’t believe him, Diana. This is another of his practical jokes, no doubt. Any moment now he will burst his seams with laughter.

Diana sniffed. “What did this supposed note say?”

“And don’t bother making something up, Captain, for I will know you’re fibbing. It comes naturally to you and always did. But I never fell for it, did I?”

The frown broke with exasperation and then reformed with scorn. “Oh, you know me. It was childish nonsense. Just what you would expect. Good thing you never read it.”

“Don’t tell me then,” she grumbled into her handkerchief. “It hardly matters now anyway. The years have passed, and we are both too old for climbing trees.”

“Quite,” he snapped. “Three years is an eternity.”

For me it has been, she longed to say.

Suddenly Nathaniel seized her hand. “We should start again, Miss Diana Makepiece, and put the past behind us.”

He lifted her gloved fingers and pressed his lips against her knuckles.

He met her frown with a narrow-eyed, somewhat menacing appraisal. “Your opinion of me might improve.”

“Well, it could hardly get any worse.”

Nathaniel’s hand tightened around hers and tugged her closer. “I am not all bad. We may become friends.”

Skeptical, Diana tried to retrieve her hand, but his grip was too strong. “I wouldn’t hope too hard, Captain.” She admired his spirit; she envied his lively manners and his fearlessness. But to feel more for such a capricious man would be a mistake. “I think you should—” A dark, devious twinkle sizzled in his blue eyes and made her draw an anxious breath. “Do not think of it!”

He blinked, but the wicked sparkle remained. “Do not think of what?”

“I’m afraid not. It is, however, necessary.”

“Captain Sherringham, if you dare—”

The words were stolen away as his mouth lowered to hers, claimed her lips. She’d said the wrong thing, of course. In his case, saying “if you dare” was like waving a red rag at a bull.

Diana was almost lifted off her feet, left to hover on her toes as he took his kiss. His tongue touched hers and stroked it gently. A raindrop that fell from his eyelashes to her cheek was warm and soft, tickling her skin as it trickled down the curve like a tear and finally gathered on the ridge of her jaw. Until the tip of his tongue followed it and then licked it away.

She was stunned speechless.

“If you don’t believe me about the note,” he whispered, his lips warm against her ear, “ask Jamie Bridges. It was his sling I used.”

Every inch of his hard body was pressed against her, and in her wet clothes she had little defense. He must feel her heartbeat. She might as well be naked. The wicked thought flashed through her mind as if he had put it there with his kiss.

“Ask him,” he repeated. “Unless you’re afraid.” A flare of white teeth showed as he smiled. Oh, that lethal charm. He would never lose it. “The world might tip upside down if I was proven honest for once.”

Nathaniel’s eyes shone down at her and she was caught up in their brilliance, like a fly trapped in a spider’s web.

“I once fell out of a tree for you,” he whispered, sounding bewildered.

“That would explain these bouts of madness,” she reasoned.

Jayne Fresina sprouted up in England. Entertained by her father’s colorful tales of growing up in the countryside, and surrounded by opinionated sisters, she’s always had inspiration for her beleaguered heroes and unstoppable heroines. She lives in upstate New York. Learn more about the author at www.jaynefresinaromanceauthor.blogspot.com.