**SPOTLIGHT, EXCERPT & GIVEAWAY** The Good, the bad, and the Vampire by Sara Humphreys 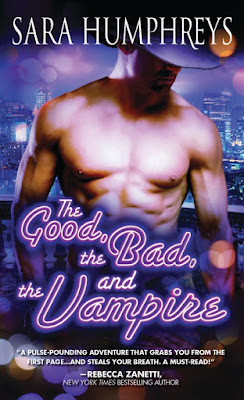 Dakota Shelton is a vampire cowboy with a penchant for cinnamon lollipops and Johnny Cash. Though highly skilled and deadly dangerous to his enemies, he's still a Texas good ol' boy at heart. And he has that heart set on wooing Trixie LaRoux-the most badass punk rock chick in town-the old-fashioned way.

Over her undead body...

Trixie is tough as nails and sharp as a silver stake-the last thing she wants is a man to sit on a porch and not grow old with. So it'll take going to hell and back fighting a new threat to vampires before she admits Dakota's courtship makes her blood hum. Turns out chivalry's not dead after all.

Hidden within the lush branches of the towering tree, Trixie crouched low to avoid hitting her head on a dangling clump of pinecones. This had been her usual spot ever since Chelsea moved in a year ago, but those freaking pinecones always got tangled in her hair. Uncomfortable as it was, this location gave her a clear view into the kitchen and family room of the tiny house. The thick scent of the pine needles filled Trixie’s nose as she sat motionless amid the branches, unnoticed by the human woman inside the little white clapboard cottage.

Trixie’s throat tightened with emotion. With her enhanced hearing, she picked up Chelsea’s tuneless hum as she washed dishes in the small sink. She seemed content and peaceful. A combination of pride and sadness swirled inside Trixie—but not regret. That was one emotion she never allowed herself to entertain. Everyone made hard choices; living with the consequences of some choices was harder than making them.

She shouldn’t be here. But she couldn’t manage to stay away, either. Not for long, anyway. Trixie could go maybe two or three months without checking on the girl, but then the nagging pull of worry would drag her back.

Was Chelsea safe? Was she happy?

Those were the only two questions that Trixie ever wanted answered. Based on the satisfied, wistful smile on Chelsea’s sweet face, the answer to both right now was a resounding ‘yes’.

Trixie adjusted her position on the thick branch, the treads of her combat boots digging into the rough bark. It hadn’t always been that way; there had been difficult times. Times when Trixie hadn’t been able to stop herself from intervening. She had only wanted to give Chelsea a gift—an anonymous gift—but when Olivia found out about it she was freaking furious. The vampire community did not look upon meddling in human lives fondly. That didn’t matter.

All that mattered was making sure that Chelsea was okay.

The alarm on Trixie’s cellphone vibrated in the pocket of her jeans. She swore under her breath and pulled it out before quickly shutting it off. The club would be opening soon and she had to go back to get the bar stocked and ready. She glanced at Chelsea one last time before shooting into the night sky. Maybe tomorrow, after the party, she would come back for another quick visit.

As long no one found out, what could it hurt? 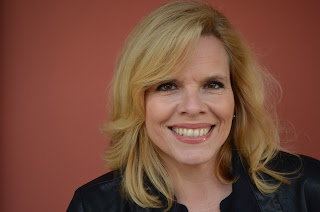 Sara Humphreys is the award-winning author of the Amoveo Legend series. The third book in the series, Untamed, won two PRISM awards: Dark Paranormal and Best of the Best. The first two novels from her Dead in the City series have been nominated for the National Readers Choice Award. Sara was also a professional actress. Some of her television credits include A&E Biography, Guiding Light, Another World, As the World Turns and Rescue Me. She loves writing hot heroes and heroines with moxie, but above all, Sara adores a satisfying happily-ever-after. She lives in New York with Mr. H., their four amazing sons, and two adorable pups. When she's not writing or hanging out with the men in her life, she can be found working out with Shaun T in her living room or chatting with readers on Facebook. For a full list of Sara's books and reading order, please visit www.sarahumphreys.com