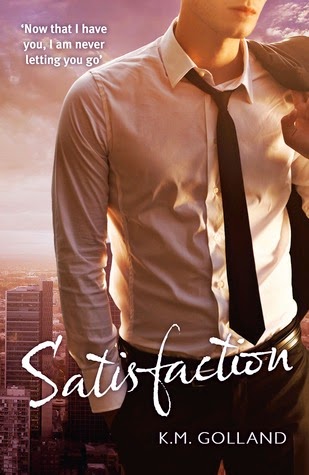 Blurb- ‘I have this one week to prove to her that we belong together, and I’m not going to waste another second of it.

Now that I have her, I am never letting her go.’

Alexis Summers is no stranger to facing challenges. She has had her fair share of them since falling for handsome billionaire Bryce Clark. Just to make it even more complicated, Bryce is her boss.

The problem is, Alexis is married. But her husband Rick has confessed to a secret from his past that has set Alexis free, at least temporarily.

Alexis has finally allowed herself to give in to the temptation that is Bryce Edward Clark, but as they realise the connection they share goes far deeper than anything either of them have ever experienced, will a single week together be enough?

Review- I think I am quickly forming a major girl crush on K.M Golland. She has without a doubt created some of the most entertaining reading I have ever read.

"I hesitated, but picked up my fork. It looks so pretty, I can't do it. Alexis, stab the pancakes, you stupid bitch."

Satisfaction continues on right where we left off in Temptation, with Alexis about to spend a full week with the deliciously tempting Bryce with no barriers and nothing to hold her back. Alexis and Bryces' relationship is one to envy. The sizzling attraction and desire is loud and obvious, both of them feeling and doing things they have never done before with a third wheel aka Alexis' conscience also making an always hilarious appearance.

"I was so overwhelmed it wasn't funny. And I wanted nothing more than to bitch-slap my conscience which was currently being a sarcastic moll."

I just love Golland's writing. Not only is she quick witted and an absolute hoot to read,

"Bryce Edward Clark, small talk, really? I am not only going to stomp on your other foot now, I am going to bite down on your tasty hot dog like I would if it were slapped in between two pieces of bread and covered in mustard and sauce."

"Why is it, that when you are desperate to be quiet, your body ignores you and instead wants to vocalise in any way it can? Right now I could probably laugh, cough, sneeze, pee and fart all at the same time."

but she also knows how to get your ovaries screaming for attention. Man does she know how to write a toe curling hot and heavy scene.

Satisfaction all in all has a storyline that consumes and flows without a hitch. It has the depth and emotion that makes an amazing romance, tantalizing sex scenes that make the perfect adult fiction, laugh until your cheeks hurt comedy as well as twists and turns that you won't see coming.

Satisfaction is available to purchase in all good book stockists around Australia.
GO AND GET ONE!

To purchase online, click on these links:
AMAZON
B&N
THE BOOK DEPO