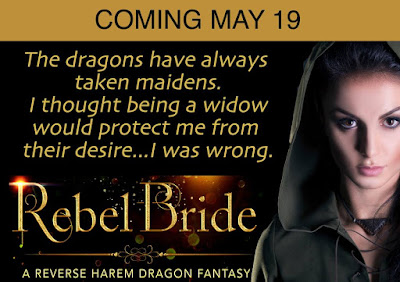 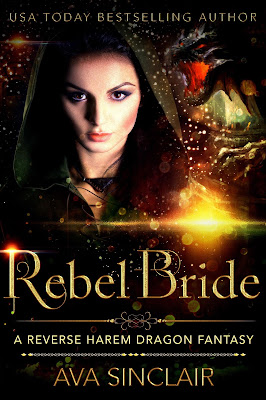 
Cover and teasers – under separate cover

BLURB
For centuries, the Drakoryan lords have taken sacrificial maidens. As a village widow, I thought myself safe from their attentions. I was wrong.

I am Thera the Healer, and I blame the Drakoryans for the death of my husband and father. They were killed before our dragon lord rulers resettled us in the Drakoryan Valley ahead of war with the ShadowFell.

Now they seek to recruit village men into their army to fight the enemy. But I seek to convince my people that the enemy is not some black dragon we have never seen, but the one who keeps us.

Now the Drakoryans are accusing me of sedition, and seek to neutralize my influence in a manner I will not accept. They seek to wed me to five Drakoryan lords tasked with keeping order in my village.


They won't get what they want without a fight. 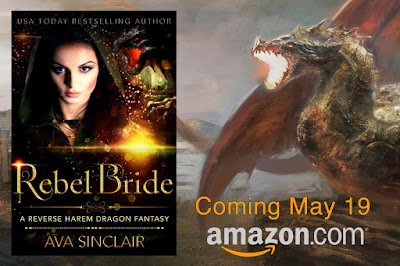 
As I walk through the village, I think of them. Even in the cold, I fancy I can still feel the heat of their huge bodies as they surrounded me, hear the steel in those deep voices when they refused to release me from this fate. It was in those moments that I realized the power of the Drakoryans. I’d thought I’d seen it when they became dragons, but their true power lies within. There is a force in them that speaks to something deep inside me, something I’d buried along with the bloody shirt.

They have given me leave to stay at my cottage at night, yet I know that will end. By day, one or the other is not far from me. Each evening now, we take our meager meals together, and when we do, I say little, having little to say. Instead, I listen, seeking to discern the nature of these men who have vowed to make me their mate.

The Lords of Kry’bil speak of the needs of the village and worries over the continuing cold. They speak of asking the witches for permission to hunt the woods for meat. I continue to learn from their conversations. These strong Drakoryan males are deferential to the feminine power in the mountains. Magda, the healer who mentored me, told me that healers have a special connection with the divine. I think of how I can sense an illness before it is described to me, and of how easily the vision of my Bran came to me wish a message. Perhaps there is magic in me, too? Perhaps, I think, there is magic in all women.

Magic in women. But magic in men, too.

Sometimes, my eyes fall on the lords, and I catch myself staring at their hard chests, their large hands, the corded ridged muscles of their forearms. I think of how it would feel, being pressed into furs beneath one of their powerful bodies, of parting my legs to be entered by a cock I’m sure would be more than sufficient to fill the aching need I try to deny. At those times, I doubt myself, and fear the image of Bran was nothing more than a manifestation of my own loneliness and physical need, just another misguided impulse, not unlike revenge.

Yet sin or sign, I am drawn to the Lords of Kry’bil a little more each day. My nipples harden when they say my name. I feel the heat coming off their bodies as they pass and feel moisture seep from my throbbing pussy. The woman in me is stirring awake. Having felt passion, I know what I am missing, and when I walk from a cottage to find all five waiting for me with serious expressions, my heart leaps a little in my chest.

“Can we have a word?” Lord Erdorin asks. I nod, looking at them from under the hood I’ve pulled up over my head.

“We can wait no more, Thera. Drakoryans are not like other men. Once a mate is named, we burn and weaken if the wait is long.” He glances towards the mountain. “We cannot afford the luxury of weakness. Not now.”

I swallow nervously as he continues.

“It has always been the practice for us to battle for first rights, but you are no virgin.” He pauses. “We will have you, Thera, however you will decide in what order.”

Dark-eyed Erdorin, his jaw dark with stubble, wears his wavy hair at shoulder length. Gyrvig, with his russet hair and beard is different from the others. Jareo wears his long hair in a single braid. He is the sternest, the most serious.

And then there are the twins, dark and bearded. I tell them apart now by their birthmarks. Tyri’s is on the left. Yrko’s is on the right.

“Choose,” Gyrvig says. The heat coming from him is the strongest. Jareo hangs back, staring intently. He has a fighter’s eyes. The twins, so large, so fierce, wear the same expression of want. I look back at Erdorin and give him the answer that seems most fair.

A fresh wave of heat comes off of Erdorin. His brothers’ disappointment is palpable.

“We will sleep outside tonight.” Jareo says.

Erdorin smiles. “I have seen the bed in your cottage, little one. It is small like you. We will end up on the floor just the same.”

I scowl. “Perhaps. But it is my floor. I would awake in my own house tomorrow.”

He turns away then, and I realize I am trembling.

The wait is over. Tonight I will be claimed by the first of five Drakoryan lords.

Variety is the spice of life and Ava Sinclair writes a little something for everyone, from dark romance to menage to kinky AF age play. But the one thing that is consistent in her books are strong storylines, alpha males, and strong women whose hearts and bodies aren't given up without a fight.