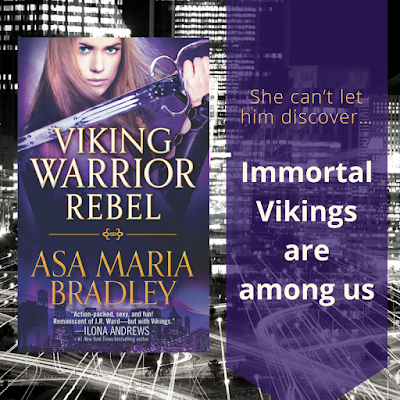 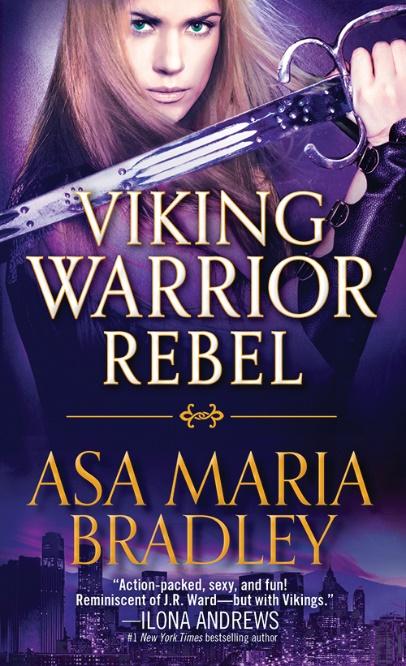 She can’t let him discover…

Astrid Irisdotter is a Valkyrie—a fierce warrior fighting to protect humanity from the evil god Loki and his brutal minions. She’s on an urgent mission for her queen when everything goes hideously sideways. Undercover agent Luke Holden arrives on the scene just in time to save her life—and put his own on the line.

Luke may have saved her, but that doesn’t mean Astrid can trust him. Tempers flare as they hide secret upon secret from each other, but Astrid’s inner warrior knows what it wants…and it will not take “no” for an answer.

I am delighted to join you today to chat about one of my favorite things: Vikings! Being born and raised in Sweden, I was introduced to Norse mythology through childhood picture books. I loved the stories of Odin and Freya and the other gods who lived in Asgard. And later on, my seventh grade history teacher noticed my interest and shared his favorite books with me. In my Viking Warriors series, I combine my love of Norse mythology with my love of paranormal romance to write about brave immortal warriors who have been sent back to Midgard—where mortal humans live—to protect contemporary humanity from Loki and his evil minions. And they of course happen to fall in love in the process.

Vikings and Valkyries have inspired a slew of story tellers, from Tolkien’s The Lord of the Ring trilogy to the History Channel’s TV show Vikings, Norse mythology and history is showing up in a lot of our pop culture. So why don’t we dish about our favorites?

I have to include Red Serpent in my list because he’s the main character in the book that my amazing seventh grade teacher first steered me toward when he noticed my interest in all things Vikings. (The original Swedish title is Röde Orm, which means Red Serpent.) I devoured the adventures of the Viking nicknamed Red because of the color of his hair and his hot temper. The book also has some very strong female characters, especially Red Serpent’s mother who shares my first name. This may be another reason for why I connected so strongly with the book. ☺

If you are a fan of Viking stories, I hope you check out my Viking Warriors series and also Tales of the Valkyries, an anthology of Viking short stories I collaborated on with Gina Conkle, Harper St. George, Anna Marklund, Emma Prince, and Lisa Hendrix. The anthology is free right now across all ebook retailers.


Astrid’s boots echoed against a shiny marble floor as she crossed the Denver hotel lobby. The male clerk on the other side of the check-in desk watched as she approached, appreciation glinting in his eyes. The man’s gaze dipped low and swept up her body before meeting her eyes again. Astrid sighed at the predictability of the mortal male, but still increased the wattage of her smile.

The man’s eyes widened. “Welcome. Are you checking in, Miss…?”

“Idrisdotter, but call me Astrid. It’s probably easier.” She gently lowered her large duffel bag to the floor. Her smallsword was in its scabbard, wound up in layers of clothing. It wasn’t likely to make a sound as the bag hit the floor, but the weapon was her favorite and had been with her for a long time.

The clerk’s glance moved to her cleavage as if pulled by a magnetic force. “Ah, let’s see what type of rooms we have available.” He swallowed loudly.

One free upgrade and a short elevator ride later, Astrid unlocked the door of a luxury suite. The expansive windows covered one whole wall and offered a splendid view of the Denver downtown skyline and the Rocky Mountains beyond. Snowcapped peaks rose dramatically against a clear, blue spring sky. It reminded her of the mountains at home, although their tops were more rounded, more worn down. The Scandes, the mountain chain between Sweden and Norway, had been old even when she was a little girl thousands of years ago. And still, they had appeared gigantic to that little orphan thrall girl who had almost no one looking out for her.

She shook her head to get rid of the memories of how powerless she had been when she was a slave. Instead, she strolled into the bathroom, humming appreciatively to herself when she saw the large sunken tub with jets. She turned on the hot faucet and dumped a whole mini bottle of bubbles into the bath. It had been a very long time since she was that dirty, little thrall girl who didn’t even own the rags that covered her body.

She didn’t go to excess now, but she made sure to appreciate the simple pleasures in life. At least, that’s what she told herself. There was probably some deep-seated psychological reason why she felt cleaner and prettier if the soap she’d used was expensive, but why waste time figuring that out? It was more efficient just to spend the money. She shed her clothes and sank into the hot, fragrant water.

A contented sigh escaped her lips as the warmth soothed her travel-worn body, easing the ache in her tense shoulders and stiff back. She sank in deeper, fully submerging. As she blew out her breath under water, more tension left her body, but a small knot of anxiety remained in her stomach. She couldn’t afford to relax fully. Couldn’t afford to screw up. She’d been making too many mistakes lately and gone too far over the edge into battle fury. Twice, one of the Vikings had to knock some sense into her before she had her rage under control again.

Then there’d been that night where she almost killed a human. It went against everything she stood for. She had been chosen by Freya to protect the people of Midgard. If she didn’t do this mission right and bring back her queen’s brother, she might as well not return to the Norse fortress.

A while later, Astrid checked her reflection in the hotel elevator. She planned to visit a well-reviewed French restaurant a few blocks from the hotel. She smoothed down the simple black dress she’d brought especially for the restaurant and turned sideways to see if the dagger strapped to her thigh would show in profile. Twisting a few degrees more, she adjusted the silver belt she wore around her waist. Two throwing blades slid sideways into the back of the custom-made belt, their decorated hilts blending perfectly with the inlays of turquoise and lapis lazuli.

It took only a few minutes to reach the restaurant. The maître d’ assured her the table she’d reserved would be available shortly and suggested she wait in the bar. Astrid walked the few steps up to the bar, which was raised half a level above the restaurant’s main floor. She ordered a glass of her favorite first-growth Bordeaux and inhaled its aroma before savoring her first sip. Sighing contently, Astrid perched on a high stool as she let her gaze roam over the patrons enjoying their dinners.

She went for another sip of wine, but froze with the glass halfway to her lips. One of the men across the room looked familiar. He was in half profile as he spoke with his male dinner companion. It couldn’t be Holden. No way would he be here in Denver. She’d avoided him and his club ever since that night she’d been high on battle fever and, as a result, had gone down a wide road of poor choices due to lack of impulse control.

The memories of Luke Holden’s calloused hands heating her skin had her suddenly blushing.

As if he knew she was looking at him, the man turned and their gazes caught across the room. She’d recognize that blond hair and those steel-gray eyes anywhere. She knew how the one-day stubble of that square jaw felt against her own skin. How those arrogant lips could deliver the most scorching of kisses. Heat spread through her body as other body parts perked up at the memory of their last encounter.

Holden quirked an eyebrow and raised his glass to her in a silent greeting, a cocky smile stretched across his lips.

2016 double RITA finalist Asa Maria Bradley grew up in Sweden surrounded by archaeology and history steeped in Norse mythology, which inspired the immortal Vikings and Valkyries in her paranormal romances. She arrived in the U.S. as a high school exchange student and quickly became addicted to ranch dressing and cop shows. Asa currently resides on a lake deep in the pine forests of the Pacific Northwest with a British husband and a rescue dog of indeterminate breed. She graduated from the Inland Northwest Center for Writers program at Eastern Washington University with an MFA in creative writing and also holds an MS in Medical Physics from University of Colorado. Visit her at www.AsaMariaBradley.com, or follow her on Twitter @AsaMariaBradley.