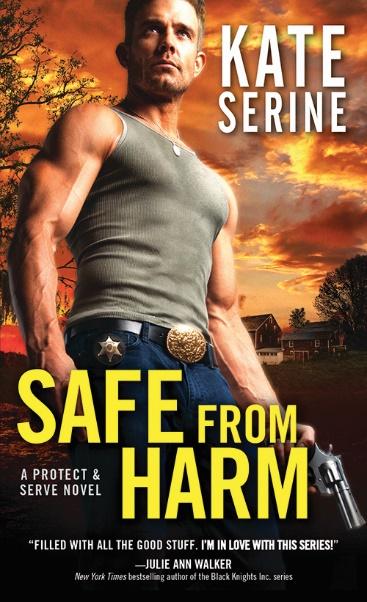 
It's All Harmless Flirting Until Someone Gets Shot...

Deputy Gabe Dawson has had his eye on prosecuting attorney Elle McCoy for years. But the smart, sassy redhead is immune to his legendary charm and good looks--until Gabe is shot on the courthouse steps protecting Elle from a vengeful domestic extremist.

Elle has been protecting her heart from the cocky playboy cop. But it's hard not to notice a guy when he takes a bullet for you and seems determined to turn his life around. With terrorists still at large and Elle a target, Gabe and his law enforcement brothers kick into high gear to take down the threat. And as they work together, Elle realizes she's losing her heart to a man who will risk it all to keep her safe from harm.

Kate SeRine writes award-winning romantic suspense and paranormal romance. A past recipient of an Emily Award and the National Readers Choice Award, she has also been a finalist in the Fire and Ice Contest, Finally a Bride Contest, and the Gayle Wilson Award of Excellence. She lives with her husband and two sons outside Indianapolis, Indiana. Connect with Kate at www.kateserine.com.

I’m so excited to share Gabe and Elle’s story! Sparks were flying between these two in Stop at Nothing, so I couldn’t wait to bring their relationship to readers. I love these characters—from their flirtatious banter to their deeply emotional moments and everything in between.

Sexy and movie-star handsome, Deputy Gabe Dawson is the golden boy of Fairfield County. With a generations-long family legacy of law enforcement and a single-minded determination to reach the top, Gabe’s career promises to eventually eclipse even that of his famous father. All this makes him one of the most sought after bachelors in town. But the one woman Gabe truly wants doesn’t want anything to do with him.

There’s something about prosecuting attorney Elle McCoy that Gabe just can’t get enough of. She’s beautiful, brilliant, and the sexual tension between them every time they’re in the same room can’t be denied. But her snarky rejection of his charm makes Gabe want her even more. Not used to being turned down like a hot stove, Gabe hopes Elle will eventually give him the chance to show her he’s more than his reputation.

Elle’s had a crush on Gabe Dawson since she was a gangly teenager but was convinced he’d never give a girl like her a second glance. So now that they’re adults and she’s witnessed the famous Dawson charm in action, she doesn’t trust his flirtations—especially considering Gabe’s reputation as a womanizer. But when he takes a bullet for her, his self-sacrifice causes her to take a closer look. Soon she discovers the man he truly is and realizes what was once a schoolgirl crush is now so much more.

I really loved exploring Gabe and Elle’s evolution from frenemies to lovers, and I hope readers enjoy their playful, sultry interactions as much as I enjoyed writing them. But in addition to the romantic story central to the novel, is the story of love and family—regardless of whether that family is related by blood or bound together by loyalty and shared experiences. Exploring these complicated dynamics was an incredible experience and resulted in some of my favorite scenes in the novel.

There’s so much that I loved about writing Safe From Harm, and I’m thrilled to be able to share it now with all of you. Happy reading!

Gabe started awake, throwing off the covers and bolting to his feet. Pain shot up and down his leg as soon as he made contact with the floor, making him groan through clenched teeth and follow it up with a juicy curse.

His gaze shot up to see Elle standing inside the doorway, gorgeous eyes wide, her peaches-and-cream skin flushed an alluring shade of pink that deepened as he gaped at her. When she dropped her gaze, turning first left, then right, as if forgetting where the door was, he suddenly realized his bare ass was hanging out of the back of his hospital gown giving her quite an eyeful.

He straightened quickly, wincing with the sudden movement, belatedly realizing his wound apparently hadn’t affected other areas of his anatomy and he was sporting some serious morning wood, which was pitching one helluva tent beneath the thin cotton gown.

He cursed again and dropped down on the bed, throwing the blanket over his lower body in one quick motion and trying unsuccessfully to suppress another groan. He squeezed his eyes shut for a second until the wave of agony passed. When he opened them again, he was surprised to see Elle standing before him, her gaze searching his face.

“Are you okay?” she asked, her hand coming up to cup his jaw. The gentle warmth of her palm sent a chill through him, making him shudder. Her hand immediately dropped away at the response, mistakenly thinking her touch was unwanted when, in fact, he desperately he craved it. “I’ll get the nurse.”

When she reached for the call button hanging near the head of the bed, he gently grasped her wrist and drew her hand away. “Leave it. I’m fine.”

She swallowed and dropped her gaze briefly to their hands, looking like she wanted to bolt and rid herself of his touch. He almost released her, saddened that she found the contact so unwanted. But then he felt her pulse quicken beneath his fingertips.

So maybe it wasn’t revulsion she was feeling after all…

When her gaze drifted back up to his, he decided to test his new theory and let his thumb slowly smooth over her skin. “How are you?” he asked softly.

She gave him a tremulous smile and, God help him, he damned near dragged her into his arms and kissed her. But he managed to restrain himself as she said, “Shaken up a bit. But no lasting harm.”

He narrowed his eyes at that, not believing her for a second. “You sure about that, honey?”

“I’ll be okay,” she assured him, nodding a little, her lips pressed together as if she was trying to convince herself of the truth of her words. “It’s just…” She sighed. “I almost died yesterday.”

There it was. The truth they both needed to face. Elle was no fool. Hell, she was brilliant as far as he was concerned. She must’ve known as certainly as he did how close they’d both come to losing their lives the previous day. So there was no denying her words, no use trying to convince her she was mistaken.

“Yeah,” he said, still caressing her pulse point. “You sleep at all last night?”

She shook her head, her eyes beginning to glisten with unshed tears. “No. All I could see when I closed my eyes was—” Her words broke off when her voice hitched with emotion.

He slipped his hand into the thick waves of hair at the base of her neck and pulled her toward him. Every inch of him—especially those hidden under the blanket—longed to kiss her, but at the last moment, he pressed his lips to her forehead in a lingering kiss.

He didn’t know what to say to make her feel better. It wasn’t like that time when Todd Jenkins had broken up with her a week before the homecoming dance and Gabe had hinted to Chris that maybe he should ask her. Or the time her biggest rival was made editor of the school yearbook and he’d broken into her locker before school to leave her flowers (anonymously, of course). Or the time he’d given Aaron Maguire a fat lip when that asshole had gotten a little grabby with Elle in spite of her saying no loud and clear. Or the time he’d driven two hours to the college she was attending to fix her car on the sly because her aunt Charlotte had mentioned that it wasn’t running and Elle refused to ask for the money to fix it.

He’d been secretly looking out for Elle for as long as he had known her, never letting on that he was the one, never asking for anything in return. Knowing she was safe and happy was enough. But he was at a loss on how to comfort her this time, when they were very literally face to face.

He’d never known how to deal with a woman when she was upset. He supposed he got that from his father, who wasn’t exactly the most nurturing guy. Normally, Gabe bailed when things got serious enough with a woman that she was actually sharing emotions. Okay, to be honest, he usually bailed way before that. But seeing Elle looking lost and afraid brought out a protective urge in him that he’d never really experienced with anyone else—not to this extent, anyway.

He could lie and say she’d be fine in a few days. But the truth was, it might be something that haunted her far longer. God knew he had plenty of nightmares—some of them walked and talked and dropped by for a visit in his hospital room in the middle of the night.

Elle’s hand came up to rest lightly on his chest, and he felt her breath quicken as tension began to build in the air between them. “Thank you for saving my life,” she whispered. She pulled back enough that their faces were just inches apart. And for a moment, he thought she might actually kiss him. The look in her eyes told him she was considering it, which shocked the hell out of him…