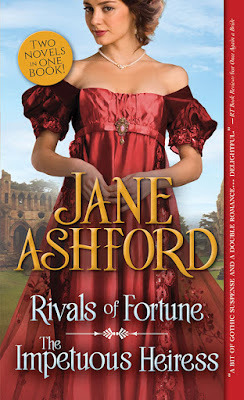 RIVALS OF FORTUNE — Joanna Rowntree thought she would die of a broken heart when her one true love married another—until not one but two fascinating newcomers appear on neighboring estates. As the roughhewn Jonathan Erland and the polished Sir Rollin Denby engage in a heated competition for her hand, Joanna realizes her heart is alive and well—but to whom will she give it?

THE IMPETUOUS HEIRESS — When spoiled Lady Alicia Alston, privileged daughter of a duke, is accidentally tossed into a ravine after a wild gallop with Ian MacClain, Earl of Cairnyllan, she expects a proposal as soon as is convenient. The stubborn Scot has other ideas. It takes a headlong journey to prevent an elopement to give Alicia and Ian a chance to clear up misunderstandings and figure out what they find so damnably passion-inducing about one another…

Jane Ashford discovered Georgette Heyer in junior high school and was captivated by the glittering world and witty language of Regency England. That delight led her to study English literature and travel widely in Britain and Europe. Her historical and contemporary romances have been published in Sweden, Italy, England, Denmark, France, Russia, Latvia, Slovenia, and Spain, as well as the U.S. Twenty-six of her new and backlist Regency romances are being published by Sourcebooks. Jane has been nominated for a Career Achievement Award by RT Book Reviews. She is currently rather nomadic.


Together, the two riders thundered along the path. Trees and undergrowth flashed by. They leapt another tiny ravine—first Alicia, then Cairnyllan arching up and over and landing at full gallop. Alicia’s laughter floated back as she held her lead, and the sound brought a grim smile to the earl’s ruddy face. He bent lower, but he did not close the short distance between them.

Finally, Alicia pulled up beside a massive oak, and he swung in beside her. They were both breathing quickly, and when their eyes met, both smiled. “How dare you ride that way sidesaddle?” wondered Cairnyllan. “I certainly wouldn’t want to try it.”

She laughed. “I have ridden so all my life.” Her smile turned reminiscent. “Though I used to go astride as well, when I was younger.”

He raised one eyebrow, but replied merely, “You have the finest seat I have ever seen in a woman.”

“I didn’t want to founder your horse.” He sounded amused. “If I had one of my own…”

“Oh, of course.” She taunted him a little.

“And you had a good ten yards start,” he added, beginning to be nettled.

“Shall we try it again from here?” Alicia gazed into his eyes challengingly. She still felt immensely excited, and she realized now that this was not entirely due to the gallop. She had enjoyed winning the race, as she always did, but the presence of Ian MacClain had somehow intensified the sensation. Looking at him now, his ruddy hair brilliant in a shaft of sun and his blue eyes glinting, Alicia was abruptly flooded with a surge of desire. She thought of kissing him, and a thrill shivered through her.

Alicia had been kissed before, twice, in fits of great daring that she had later brushed aside, along with the gentlemen so favored. It had been an interesting experience, one that she was glad to have had but was disinclined to repeat. But watching Cairnyllan’s face, she was suddenly certain that with him it would not be the same at all.

The earl seemed to sense the change in her thoughts. He looked slightly startled at the heat in her eyes, then his own flickered and, at the same time, hardened a bit, conveying an equally intense response. They remained very still for a long moment, eyes locked, then Alicia took a shaky breath and wheeled her mare into a gallop again.

This time, Cairnyllan was right behind her. Alicia could see Whitefoot’s head in the corner of her eye, and her heart began to pound in rhythm with the hoofbeats. She found it difficult to breathe, and her mare, feeling the uncertainty in her hands, stumbled a little over a rock in the path. Alicia pulled her head up, and they recovered, but the hesitation had allowed the earl to come abreast.

Side by side, they raced, throwing brief glances at one another. Both bent low and urged their horses forward with knees and thoughts, intent on the contest between them.

Alicia was certain she was pulling ahead again when the widest ravine they had yet encountered loomed before them. It was at least six feet to the other side, she estimated, perhaps more. She could take it, of course, but…reluctantly, she started to ease the mare back from her headlong gallop, to prepare for the jump. Then she saw that Cairnyllan was making no such prudent move. He was going to attempt it flat out. She let her hand drop again, then quickly changed her mind. She couldn’t be sure of making the jump unless she slowed. And neither could he, she thought irritably. He seemed to have forgotten his worries over her horse.

Cairnyllan pulled ahead, and Whitefoot launched out over the ravine. Alicia caught one glimpse as he seemed to falter, then she herself was flying up and landing on the opposite side. Her mare stumbled slightly, then they were galloping along the path again.

After a moment, when the earl did not come up with her, Alicia turned. She saw Whitefoot some yards behind, his bridle dragging, slightly favoring his left forefoot. At once, she wheeled and raced back to the ravine.

Cairnyllan was in it. He had just picked himself up, in fact, and was brushing at the sleeve of his riding coat. Luckily, he had landed in a spot free of thorns, but he would have to push through a great clump of blackberry to get out.

“Are you all right?” called Alicia.

“Yes.” His tone was curt, and he sounded angry.

“Good,” Alicia snapped, and turned back to reassure the shaken animal. After a few moments an angry exclamation came from the ravine, and Alicia looked again at the earl.

Despite stern self-admonition, she began to laugh. He looked so funny standing there scowling, his head not even reaching the level of the path.

“Very amusing, I’ve no doubt,” said MacClain, the Scottish burr of his R’s intensified. “Suppose you give me a hand up.”

Alicia stifled her laughter and surveyed the situation. It would not be easy getting him out. The ravine was small but very steep. She would have to dismount. Sliding to the ground, she searched for a branch but found nothing. There were no large trees nearby. Finally, she crouched above him and extended her riding crop for him to grasp. It was not the most stable position, but the earl seemed likely to explode if she did not do something quickly, and she felt sympathy as well as amusement at his plight. How she would hate to be in it!

Cairnyllan grabbed the end of the riding crop and started to climb, but, in his impatience he pulled far too hard, and in the next instant, Alicia had tumbled forward into his arms and both of them were on the floor of the ravine in a heap.