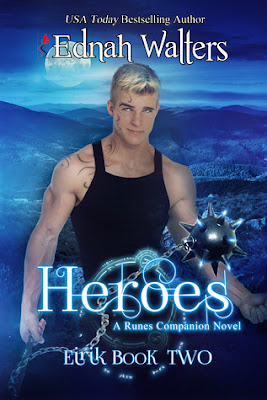 Eirik wants nothing more than to show Celestia—the Witch who pulled him out of the darkness—that his feelings for her are real, but his parents expect him to avenge a wrong done to his family. To make matters worse, Celestia is moving on and is already dating another guy. Then Eirik discovers she is the key to accomplishing his goals. Caught between love and duty, Eirik will do whatever it takes, including getting up close and personal with Celestia, to get his way.

Celestia is convinced she is drawn to Eirik because of the bond created by the dragon's kiss, so she pushes him away. But when he comes to her for help, she is once again thrust into his world, where things are never what they seem.

From Earth to the realms of the gods, betrayal follows them and help comes from unexpected sources. But when the time comes for Eirik to choose, will he fulfill his duty or follow his heart? Everything rests on his shoulders as the wrong choice may lead to Celestia's worst fear—the rise of the Harbinger of Death.

I've said it before and I'll say it again, Ednah Walters is a genius!!!! Ednah is such an amazing story teller, she just has a way with her words that draws you in and makes you apart of the story. Every book she's released I've fallen in love with and this new release is no exception.

Right from the start I was pulled back into a magical world full of witches, demons, Valkyries & dragons. A world with amazing characters you'll feel a strong bond with, they become close friends you'll want to visit regularly.

With an action packed storyline with twists and turns around every corner, betrayal and love, what more could you ask for?! I highly recommend this series to everyone looking for something fun and addictive. Trust me, you won't regret it. ^_^