**SPOTLIGHT, EXCERPT & GIVEAWAY** Hungry like the Wolf by Paige Tyler 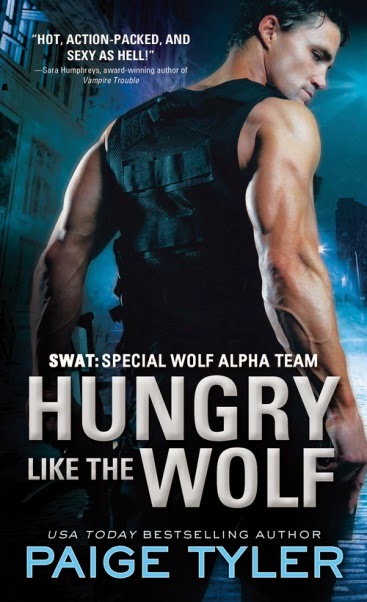 They’re tight
They’re on target
They’re as alpha as men can get
The Dallas SWAT team is hiding one helluva secret…they’re a pack of wolf shifters.
The team of elite sharpshooters is ultra-secretive—and also the darlings of Dallas. This doesn’t sit well with investigative journalist Mackenzie Stone. They must be hiding something…and she’s determined to find out what.
Keeping Mac at a distance proves impossible for SWAT team commander Gage Dixon. She’s smart, sexy, and makes him feel alive for the first time in years. But she’s getting dangerously close to the truth—and perilously close to his heart...
Paige Tyler is the USA Today bestselling author of sexy, romantic fiction. Paige writes books about hunky alpha males and the kickbutt heroines who fall in love with them. Visit www.paigetylertheauthor.com. She and her very own military hero (aka her husband) live on the Florida coast with their adorable dog.
Buy Links
Amazon | Apple | BAM | B&N | Chapters | Indiebound


Excerpt
“We dropped Corporal Riggs off a few blocks out from the scene. He hoofed it in over the rooftops while we were getting into position outside. He went in and set up the remote cameras and microphones while everyone inside was focused on us and the other police officers.”
Riggs and Taylor stared at their commander, clearly shocked by how open he’d been about their tactics to a member of the media. Mac was stunned, too. She’d been fishing when she’d asked the question. She hadn’t expected them to actually answer her.
Dixon chuckled. “You don’t have to look so alarmed. It’s not like I shared state secrets. Besides, Ms. Stone will be coming by the compound later today to take a look around and see how we operate.”
Mac did a double take. “Seriously?”
His amber eyes met hers. “That’s what you wanted, isn’t it? An in-depth look at a day in the life of a SWAT officer?”
She was more interested in finding out if they were hiding something, but she didn’t tell him that.
“I figured if I didn’t make the offer, you’d only hang around outside the compound for months until I agreed to let you in. Or until you tried to sneak into the middle of the next hostage situation,” he said. “This way we can do our job without worrying about you popping up out of nowhere, and you get to do yours without risking your life.” She opened her mouth to thank him, but he held up a finger. “There’s one condition, though.”
“Name it.”
“You agree not to detail any of our tactical procedures or techniques like the one I just told you about. You print those and you’ll get my team killed.” He lifted a brow. “Do we have an agreement?”
Mac nodded eagerly. “Yes.”
She’d agree to whatever he wanted if it got her in the compound—even if it meant going back on her word later. Although, after today, she wasn’t sure there was a story. She seriously doubted these guys were doing drugs, regardless of what Marvin said. But that didn’t matter. No way was she passing up an opportunity like this.
“I’ll see you at the compound this afternoon then,” Dixon said as he opened the door for her. “Say three o’clock?”
She smiled up at him. “I’ll be there.”
Mac had to resist the urge to do a little happy dance as she hurried back to the news van. She wasn’t sure how it had happened, but somehow she’d gotten herself an engraved invitation to get up close and personal with the country’s most elite tactical unit—the Dallas PD SWAT.