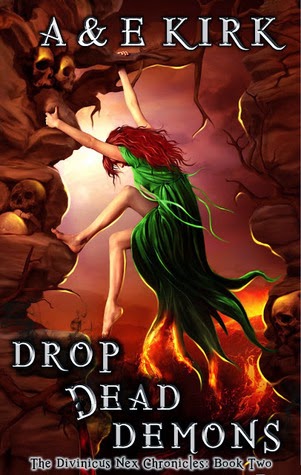 Survival. It's an on-going battle.

GOING ON A TREASURE HUNT...

Aurora Lahey finally knows why supernatural slayers salivate to slaughter her, but how to stop them? Not so much. Sure, she's discovered her own lethal powers, and has six sexy, super-charged, demon hunting Hex Boys watching her back--the hottest one watching every part of her. But when a seductive stranger delivers a deadly ultimatum, Aurora and the Hex Boys plunge into a do-or-die hunt for a legendary Mandatum treasure, which will finally shift power in their favor. Or unleash hell on earth.

Pursued by demons of mythical proportions, Aurora and the Hex Boys race deeper into the shadowy world of a centuries-old mystery and brutal conspiracy, where no one and nothing is what it seems. Where love and betrayal go hand-in-hand, and trusting the wrong person not only breaks your heart, but gets you killed.

DEMONS ON YOUR TAIL...

Uncovering shocking secrets from the Hex Boys' past, hiding her Divinicus Nex identity, lying to her pretend-wish-he-were-real boyfriend, dodging demons, breaking into ancient tombs, taking the unexpected side trip to the dark depths of the Waiting World, tracking a traitor, and passing Physics...Aurora could do that in her sleep. Or more likely, die trying.

DON'T GET CAUGHT!
ADD ON GOODREADS

5 SASSY BOOKS!
My Review:
And it just keeps getting better and better. I was so glad that I had book 2 to jump straight into once I finished book 1, though now I have to play the waiting game for book 3.... (don't leave us hanging too long lol) ^_^
A&E Krik have brought us another hilarious, demon killing, action packed adventure. I was sucked straight back in to this amazing world.
Aurora is just as snarky and wild as ever and I hope that never changes, I love this chick!
The hex boys are some schmexy kick ass characters who bring so much spark to the story. If these boys were anymore awesome, the pages would be on fire! -_^
Matthias is still headstrong and stubborn, still refuses to like Aurora and goes out of his way to give her hell, but our girl isn't taking that crap and gives it all back ten fold! Haha!
Blake just cracks me up, I just can't get enough of his hero syndrome he's gotta be the knight in shining armour. He's still trying to get Aurora to pick him lol. I'd love to give him a huge bear hug or really him give me one lol. He has to be my second fave out of the boys.
My first fave is Ayden, like Aurora, there's just something about him that gets under my skin (in a good way). He's my fire boy! He's sweet, caring but also can seriously kick some ass when needed.
Jayden is his usually awkward self, still spurting out a little too much info. He's determind to help Aurora use her Divinicus powers to help with the "demon" problem. He also likes to pop into the bathroom while you're showering LOL!
Tristan, the boy next door, the one who likes to tap on your bedroom window while you're in a towel lol.
And then there's Logan, he's my shy guy, I always just wanna jump in and give him loads of hugs. He's full of surprises this one. ^_^
Oh, and the new mysterious boy Rose, who seems to have a particular interest in Aurora and as you will soon read a very interesting dress sense lol.
I'm going to share with you one of my favourite scenes, it literally had me in tears, I just could not stop laughing....
“Rose stood in the last faint beams of sunset.
“Whoa!”
“Is he wearing a leather cat suit?”
“Holy Mother!"
“Dude!”
The guys all quickly averted their eyes and raised their hands to further block any chance of catching a view. Anything to not see Rose in his painted-on leather one-piece that left absolutely nothing to the imagination.
“Stunning, right?” Rose spread his palms as far as the cuffs would allow.
“Oh, I’m stunned.” Ayden looked ill.
Rose looked down at himself with admiration. “Not many males can pull off this look.”
“No male can pull off that look.”
"Actually, his finely sculptured physique would be considered the perfect complement for this type of anatomically revealing attire which accentuates his—”
“Bloody hell, Jayden, shut it!”
“Dude, this is so not right.”
“I feel like it’s looking at me.”
“Feel like what’s looking at—? Oh. Oh! Ugh, now I feel like it’s looking at me too.”
“How can it be looking at both of us?” “Are you serious?”
“I’m gonna be sick.”
“Someone please gouge out my eyes.”
LMAO!! Yep, still slays me. ^_^
Okay, you twisted my arm. Here's one more funny scene...
“Mom, this isn’t what it looks like.”
Mom put her hand on her hip. “It looks like a group of boys wrestling on the floor of your bedroom while you watch. Wearing a towel.”
“Okay,” I admitted, “it is what it looks like, but it’s not—”
“Sexual?” She raised her eyebrows.
“Mom!”
Luna stuck her head under Mom’s arm and sucked in a breath. “She’s gone from a love triangle to a kinky sex pentagon.”
LMAO!! I love this family!!! ^_^
Can I please get adopted into Aurora's family? You could write me straight in there, right? LOL! They're just so awesome!!!
If you're looking for a hot new read for those cold winter nights then look no further, Demons at Deadnight & Drop Dead Demons will totally rock your world!!
I CANNOT wait for book 3, hopefully the wait won't be too long cause I need more of those boys! ^_^
HAPPY READING!!!
﻿
Posted by Stacey at 5:47 PM