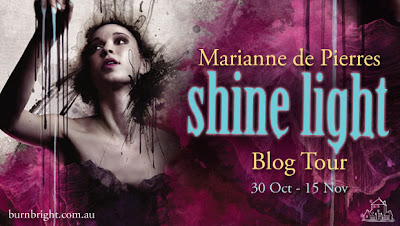 Welcome to the Shine Light blog tour. At each stop we’ll be revealing something new about the characters in Shine Light. What makes them tick? Do they have any secrets? Read on to find out . .
Charlonge
Occupation: Supervisor at Vank
Home: Lidol-Push
Special Characteristics: patient and responsible
Retra/Naif is so vulnerable and innocent when she arrives on Ixion that she needs a mentor, or a guide. Her shyness with boys suggested that this should be a slightly older or worldlier girl. I can’t remember how I came up with the name Charlonge, but it sounded good on my tongue (writers often practise words out loud!).
Charlonge however, is much more than just Naif’s caretaker. She has her own dreams and desires. Her background is quite different to the one Retra/Naif and Joel/Clash experience on Grave. She loves her parents and family and didn’t feel the need to escape them. What draws her to Ixion is her thirst for knowledge. She knows there is much more to the world than she had been taught and curiosity is her muse. In some ways she’s the bravest of them all, motivated by a need for intellectual knowledge rather than more visceral purposes like revenge and self-gratification. She risks everything for it.
Charlonge is attracted to Joel’s desire to be free of limitations but doesn’t like the fact the Dark Eve has channelled his energy into being her enforcer. She wants Joel to open his eyes to the true nature of freedom – see that it is gained through knowledge, not fighting. If I was to write an epilogue to the series, or indeed another series, it would feature Joel/Clash and Charlonge’s struggle to allow their feelings for each other to triumph over their different ways of living life. For truly, theirs is an enduring love. 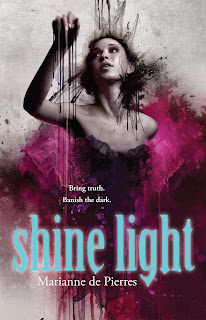 Synopsis
Ixion. The island of ever-night.

If she had a choice, Naif wouldn’t go back. But her friends will die if she doesn’t find a cure for the badges that are slowly killing them, and her brother is there, fighting against the Ripers who hold everyone in thrall. And Naif has knowledge that might save them all.

First she must solve the mystery of Ixion’s eternal night. Then she must convince everyone – rebels and revellers alike – to join her cause. And all the while, she must fight the urge to go to Lenoir – her greatest love, her mortal enemy.

The secrets of Ixion must be revealed. The evils must be stopped. A new dawn will come.

(See http://www.burnbright.com.au/ if you missed the first stop)

She kept her recount spare, asking Markes for his opinion once or twice. He was next to Emilia, who sat stiffl y, terrifi ed yet trying not to show it.
‘When the Ripers drain us on Ixion, they don’t just do it to help them evolve the Night Creatures. Part of our lifeblood is used to make a youth elixir for the Elders. The Elders and the Ripers have a pact and have been working together for a long time. The Elders want young people to go to Ixion so that they can steal their youth.’
‘Barbaric!’ said Ruzalia, pounding the table. ‘Sinful!’ She stared at Naif, eyes narrowed. ‘I had wondered if they’d sought to shed themselves of the young dissidents in your city – those who may cause trouble – by letting them run away, but this is . . . this is even worse.’ She slapped her hand against her forehead. ‘And what of the other places from which the young come to Ixion? Lidol- Push? Are they part of this?’
‘No!’ said Charlonge hotly. ‘Our leaders would not do such a thing.’
‘How can you know?’ said Ruzalia.
‘I did not hear of any other places mentioned, but we should be careful. Who knows how far the Ripers have reached. Returning to any of them might be dangerous,’ said Naif. She glanced from her friend back to the pirate. ‘They seek to undermine you, Ruzalia. The beads the young ones on Sanctus possessed were given to Jud by your merchant at Port of Patience. The Chief Elder paid him to do it.’
‘Faranzo sold them to Jud?’
‘If that is your chief merchant’s name, then yes.’
‘You have done well to learn this. Better than I expected,’ said Ruzalia.
Despite her meal and her nap, Naif felt weary enough to die. Their fl ight though Grave, and the discovery that the people who governed her world were no more than cannibals feeding off their young, was too horrible to believe; the ugliest of truths, which had left her drained. ‘Any news from Sanctus and Ixion?’
Break each code at the end of every blog post on the tour and your name will go in the draw to win a **super mystery prize** basket. Email your answers to marianne@mariannedepierres.com.
“ZIT QFLVTK OL OF ZITLT WGGAL. TCTKNZIFU O VGXSR TCTK VQFZ ZG AFGV” – EQKSGFUT.
Ready for your next fix? Meet the Night Creatures at
http://veganyanerds.blogspot.com.au/
Did you miss the feature on Ruzalia? See
http://www.burnbright.com.au/
For the full tour listing
see
http://www.burnbright.com.au/
Here are the first two books incase you're new :-)
(my reviews are in the review tab above)
We would like to thank Marianne de Pierres and Dorothy from Random House Australia for including us in this amazing tour, we hope you enjoyed our stop. Don't forget to follow the tour and break the code to win!
Posted by Stacey at 6:00 AM