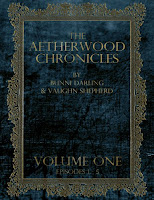 Title- The Aetherwood Chronicles- Volume 1- Episodes 1-5
Author- Vaughn Shepherd and Bunni Darling
Publisher- Lion and Mermaid Publications
Release Date- 4th July 2011
For 18+ to read only!
Description- An anthology of the first five episodes in the Aetherwood Chronicles, a lush, intriguing world filled with sensuality and the supernatural. This anthology combines Episodes 1 through 5, including: Davian and Starr - Episode One: "A Charm", Pheo and Silky - Episode One: "Aos Si", Blair and Dresdin: "New Friend, Old Friend", Davian and Starr - Episode Two: "Twisted", and Pheo and Silky - Episode Two: "Raising the Stakes". This anthology includes scenes of graphic sex, and the episode Blair and Dresdin: "New Friend, Old Friend" includes descriptions of violence and torture.

Review- To be honest, I'm not too sure what to say about this one... One thing is I know for certain is that the authors of this one have one seriously twisted side. The Davian and Starr episodes didn't really draw me in at all. Quite frankly it was boring. It was your typical guy pursues girl, guy turns out to be a vampire but girl is already claimed by another vampire but he keeps pursuing her anyway. Throw in a ghost and a sex scene and there's your story. Blair and Dresdin's episodes is where Shepherd and Darling show their twistedness. The first episode is like some Saw movie s**t. Totally grossed me out! The intimate details of snapping bones and calving into the calf muscle to feast on the tender muscle their had my stomach churning. At least with the Saw movies you can look away! There is no looking away while reading and you cant skip it because you lose vital parts of the story! So I had to swallow and teaspoon of cement and harden the eff up while reading it. And in case you didn't clue on, it's a vampire story... Probably the best out of the three. Now for Pheo and Silky. Apart from there meeting each other at the start the rest is pretty much a porn fest. Don't get me wrong I LOVE reading lemons but when the only thing that seems to be happening is lemons it gets kind of boring. They seem to lose the point of the story because they get too involved in the sex scenes. I like to see an actual story!

I will say some positive things about Shepherd and Darling though. They have an amazing ability to describe everything in their story with such detail and precision, hence the squirming in Blair and Dresdin's story. They did a great job of making it easy for me to paint a picture in my head of how all of the surroundings were, even the food the characters ate were described with accuracy. All in all if you love watching porn and the Saw movies but have small children around all the time or prefer books then this is for you!
To purchase your copy of The Aetherwood Chronicles check out AMAZON
And while you're at it, check out Lion and Mermaid Publications!