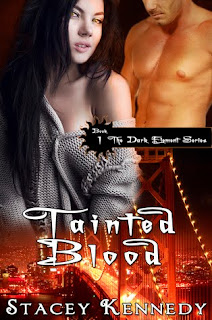 Blurb: Darkness is settling over San Francisco—vampires in the throes of blood lust are taking innocent lives. One witch will need to see past her fear, and trust her Guardian, before everyone is in danger, including herself…
Earth Witch, Sabi, has been gifted with the ability to see premonitions of the darkness that threatens human lives. Safe in the Otherworld, she adjusts to these new visions…which isn’t going so well. Luckily, she’s got the sexy Guardian, Ryker to help her work through these visions. He’s intent to show her how to distance herself from them and help her gain control of life. Not that it’s really helping. The visions are leaving her crippled and unable to help pinpoint the killer’s locations to stop the acts from happening.

If that’s not enough to deal with, she soon begins to see vampires on a killing rampage in San Francisco. Vampires are being born and left to fend for themselves, resulting in innocent lives being taken while they’re in the throes of blood lust. But as Sabi’s visions begin to kick up a notch, personal matters need to be put aside. And as the mystery begins to unravel, Sabi will begin to see that these visions are getting far more dangerous and that humans are not the only ones at risk―she is.

Want to drift off to a place where men are men and the bad guys are dust? That’s what will happen when you read Tainted Blood by Stacey Kennedy.

This book gives you, thrills, chills, a little spice and a whole lot of action! It takes you from a normal hum drum day, into a night of blood dripping murder and nights of ecstasy. This is one that will get you started and you’ll be up all night because you just have to see what happens next.

Sabi is a woman who has a special gift. She can see into the future. Except the only thing is, she see’s death and destruction. And it’s getting worse. The killings are happening more and more. The visions come upon her so fast and strong, but the death she see’s is not simple killings. It’s blood dripping madness that shocks and nearly destroys Sabi everytime it happens. She tries so hard to get clues from what she see’s to help catch the killer, but doesn’t always succeed. That’s where Ryker comes in. He’s a tough Guardian who is sworn to protect the Earthworld. Leaving the Otherworld, Ryker and his partner travel to Earthworld to help the police solve violet crimes against man. Needless did Ryker know that soon Sabi’s visions will be taking them both on a journey of death, destruction and new discovery for both of them.

The pages heat up with the chemistry that these two share and only gets hotter with every turn of the page.

I give this book 4 out of 5 stars!!
Check out Stacey Kennedy's website for details on all her books including whats coming up..