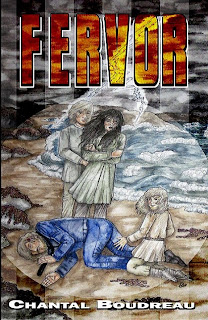 Blurb: Abandoned and scared, but less alone than he could have ever imagined, Sam awakens to the screams of the other children on the island of Fervor, and the absence of all adults.  To make matters worse, despite hearing this chaos in his head, he finds himself deaf to the normal sounds around him.  His only answers are now being provided by a strangely charismatic boy named Francis who is about to lead Sam to a gathering that will alter his life.  Why have things changed so drastically on the island, who is responsible for these changes, and what does this mean to the remaining inhabitants of Fervor?

Fervor, a dark dystopian science fantasy, looks at the complications involved in introducing a telepathic link within a population and the ethical issues surrounding human experimentation and genetic manipulation.

In the story, the main character, Sam, wakes up to discover that the 300 children on the island of Fervor have been abandoned by all of their adult minders and teachers, and that the majority of them are now connected by a telepathic link, known as the connection. To make matters worse, they are led by children who refer to themselves as Tellers to a huge gathering, where they are introduced to their “house-families,” a group of other children with varying talents.  They are made aware of how their new talents work, and receive instructions from the Tellers in the “Directives,” a set of rules that they will now be forced to follow. They also eventually realize that they have stopped aging.

Sam finds himself victim of bullying and mental domination within his house family, but settles into an uncomfortable routine, nevertheless.  All of this is thrown into turmoil when he and two house mates are contacted by a strange man, Elliot Masterson, who brings with him a magical device, the Languorite - a device that may prove to be their key to freedom as it influences their talents and causes them to age again.

Review: I was captured from the very start. Chantel has given us a completely different world to connect with, her characters are strong and easy to relate too. The book is like a cross from sci-fi and Fantasy, with a touch of magic. I'll be keeping my eye out for a second book, cause this is a captive story that you won't want to end.

Let's start with the characters.

First we have Sam he's a Finder, he has strong instincs to find anything that is of any importance. He's young and scared about the changes that are happening, yet he's very strong minded. I really enjoyed reading from his perspective.

Sarah is the Fixer she can heal almost anything, she's a courageous little thing and she has a heart of gold. She is strong spirited and will do anything she can to help her friends.

Fiona now she's got some attitude on her *winks* she's the Keeper, looks after the house and does most of the preparing. She's a little harder to get along with, but who doesn't love a woman with backbone!

Nathan he's the Watcher he protects them from any danger. He's such a nice guy, he'd come rushing from anywhere to save them.

Royce he's a Control and a nasty one at that. He takes a disliking to Sam from the get-go. I think he's just as scared as everyone else on Fervor.

Then we have Francis the Teller, he is the leader and head of the house. He can give orders that they have to obey even unwillingly. Poor Francis starts to get power hungry and abuses his position.

I really enjoyed reading this story, it'll blow your mind and i'd recommend it to anyone and everyone.

So go get your copy now http://www.smashwords.com/books/view/46909