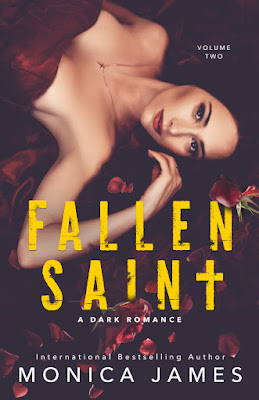 Just as this nightmare began, I once again find myself bound, destination unknown. However, this time, my kidnapper is the man who shattered my world beyond repair.

Aleksei Popov—Russia’s number one mobster, and the man I was sold to.

His intentions for me are clear—submit, obey him, and call him master—but I won’t surrender. I’m not like the other girls. Whether that’s a blessing or curse, I’ve yet to decide. The problem is, my disobedience intrigues my captor all the more.

When we arrive in Russia, the rules change.

Saint, the man who was once a sinner, is my only salvation. What was forbidden now gives me hope that there is light in the darkness. He will risk everything to set me free.

But behind these opulent walls, things aren’t what they seem, and when the fine line between pleasure and pain begins to blur, only one thing matters—saving my soul.

I was once an angel, but now…I’m a fallen saint, ready to inflict my own pain and burn this hellhole to the ground. 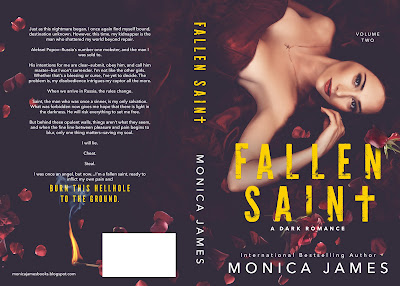 Without question, I slowly rise from the bed and follow Saint to the middle of the room. When he positions himself so Aleksei can see, I know what I have to do.

I drop to my knees and bow my head.

“Oh my.” A stunned gasp leaves Aleksei. “That is incredible. Just like a trained dog.”

A strong metallic taste fills my mouth, alerting me that I’ve drawn blood by biting down on my tongue so hard.

“What is your name?” Saint asks numbly.

“мастеp,” I reply softly, using my hair as a veil.

Before I have a chance to reply, Saint reaches down and grips my chin, forcing me to look up at him. I arch my neck, locking eyes with him. The amber swirls mingle among the flecks of green and set me alight. He is barely holding on.

“мастеp,” I say, louder this time.

“Good girl.” He releases me while I sag forward in humiliation. “You know what happens when you disobey me?”

“Yes, мастеp.” The truth is, I don’t know what punishment he intends to deliver. He reveals what a moment later.

And just like that, I’m transported back to the night when Saint first struck me with his belt.

I know for this to be believable, Saint has to make the punishments credible. But the thought of being hit again has me whimpering.

“I said lift your fucking dress.” Saint’s tone is venomous. With no other choice, I do as he demands.

When I hear his belt being unbuckled and threaded through the loops of his pants, I brace myself for what comes next.

My back faces Aleksei, so he has a clear view of my ass. My lace underwear leaves nothing to the imagination, but it appears he wants more. “Take them off.”

I lock eyes with Saint, begging he doesn’t force me to bow to this pervert’s demands, but he maintains his apathetic façade. Yet underneath this disguise, I know he’ll always protect me.

“With all due respect, Aleksei, you asked me to show you, so please allow me to do my job.” Being called a job causes me to flinch as though he kicked me in the guts. I know it’s part of the plan, but it’s hard not to get lost in the past.

“You’re right. Sorry. I got carried away. Continue.” His politeness is beyond insulting, as he’s apologizing for suggesting Saint strip me when he whips me into submission.

This is so fucked up.

Saint walks around me and kicks my legs apart. I suppress the need to scream. He doesn’t give me any warning. I hear the vicious hiss slicing through the air just before the pain hits me. With a loud grunt, I propel forward but remain kneeling.

My ass throbs from where Saint brought down his belt, but I know he could have struck me a lot harder. When he hits me over the back of my thighs, I whimper but remain upright. This strike was softer than the first.

“Do you have anything you want to say to me?”

Tears sting my eyes, but I refuse to cry. “I’m s-sorry, мастеp. I won’t disobey you a-again.”

“Are you sure?” Even though Saint barely breaks a sweat from hitting me, his breathlessness reveals it’s taking every ounce of his willpower not to kill Aleksei.

When I hear the belt being swung into position, I cry out, “Yes! Yes. I’m sorry. I won’t d-do it again.”

I brace myself for another strike, but it doesn’t come. “Put down your dress.”

With shaky hands, I do as he says.

Since I’m facing away from Saint, I can’t see what’s going on, but I’m guessing from the silence it’s not good.

“That’s it?” Aleksei is far from impressed. It seems he will only be satisfied when I’m crying out in pain and begging for mercy.

“Yes. She submitted, did she not?”

The air is thick with challenge. Saint’s methods aren’t satisfactory because Aleksei knows he could have been a lot crueler.

“She fought me like a wild cat. I think she likes you.”

My cheeks heat, but I squash down my embarrassment because this exercise was supposed to convince Aleksei otherwise. I quickly rack my brain, hoping to prove Aleksei wrong, but Saint is two steps ahead.

“She fears me,” he argues. “She doesn’t know you yet, but I’ve broken her. Just allow me to spend more time with her, and I promise, she will fear you too. I’m the only one who can break her.”

“Very well. But if your methods don’t prove satisfactory, and I don’t see a change very soon, I will take over. Are we clear?”

“I won’t have her behaving like a rabid dog because you know what happens to them?” Aleksei pauses while the room drops ten thousand degrees. “I shoot them.”

Make no mistake, he’s warning us both.

Saint grips the back of my neck, hinting I’m to stand. When I do, he leads me back over to the bed. He won’t look at me, and the detachment has me getting onto the bed, desperate for them to leave so I can process this on my own. Without him asking, I place my arms over my head after I lie down.

A tear leaks from my eye when he cuffs me, but I turn my cheek so he can’t see.

“Let’s go into my office. We have some things to discuss.” Just as Saint moves to rise, Aleksei says something which has me questioning how good of an actress I really am. “Gag her. You said she was shouting earlier.”

You’re going to be a good little girl, aren’t you, Willow?

I suddenly find it impossible to breathe.

I’m moments away from blowing our ruse when a tender caress floats across my flank. Though it’s a subtle touch, it’s enough. “That’s not necessary. She won’t scream.” Saint recognizes my panic; he knows what memories claw to the surface when I’m gagged.

“I said gag her,” Aleksei perseveres, needing to hold on to some semblance of control.

I know I told Saint to do whatever it takes, but that’s my hard limit, so I don’t know if I can stomach that. But I should know by now that Saint will always be the alpha. “Aleksei, you just said you’re willing to allow me to do this my way. Are you going back on your word?”

I don’t know why his word is so important. He’s a fucking criminal, for god’s sake. But I remember Saint saying that Aleksei does hold some honor among his men. I can only hope he’s right.

I gulp as his threat is filled with promise.

“She’ll be quiet,” Saint assures, speaking for me as he knows I’m close to breaking. “Let’s go.”

When he rises from the bed, I turn my cheek to look at him. But when I lock eyes with Aleksei instead, I realize I have to be more careful. Although we have convinced him today, tomorrow may not be as easy.

Saint doesn’t look back and is quick to leave. I soon find out why that is.

“Aren’t you forgetting something?” Aleksei blocks the doorway while I watch on in horror. He’s going to kill Saint and make me watch. We haven’t fooled him at all.

When Saint reaches into his pocket and produces the key to my cuffs, I sense he has a plan after all. Aleksei seems disappointed he surrendered it so easily.

Saint opens the door, hinting for Aleksei to move. He eventually does but not before he grins my way. The gesture sends a shiver down my spine.

This is only the beginning of things to come. 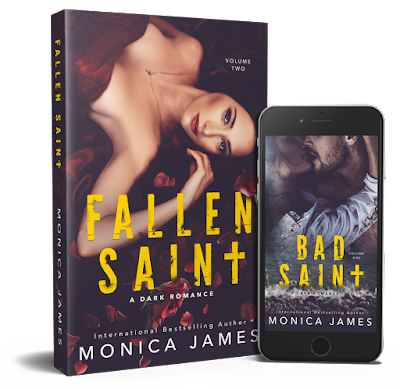 
I was kidnapped on my honeymoon by three masked men.

I was told to stay silent and abide by their rules. But they didn’t realize I wasn’t a victim…not anymore.

The open sea was my backdrop for nine torturous days. During that time, glimmers of my fate were revealed by a man with the mysterious chartreuse-colored eyes. He should have scared me, but he didn’t.

He punished me when I didn’t listen, which was every single day. But beneath his cruelty, I sensed he was guarding a grave secret.

And in a game of poker, no less.

My buyer? A Russian mobster who likes to collect pretty things. Now that I know the truth, I only have one choice.

And when one fateful night presents me the opportunity, I take it. I just never anticipated my actions would leave me shipwrecked with my kidnapper.

He needs me alive. I want him dead.

But as days turn into weeks, one thing becomes clear—I should hate him…but I don’t.

My name is Willow.

His name is Saint.

Ironic, isn’t it? He bears a name that denotes nothing but holiness yet delivers nothing but hell. However, if this is hell on earth…God, save my soul.

When she is not writing, Monica is busy running her own business, but she always finds a balance between the two. She enjoys writing honest, heartfelt, and turbulent stories, hoping to leave an imprint on her readers. She draws her inspiration from life.

She is a bestselling author in the U.S.A., Australia, Canada, France, Germany, Israel, and the U.K.

Monica James resides in Melbourne, Australia, with her wonderful family, and menagerie of animals. She is slightly obsessed with cats, chucks, and lip gloss, and secretly wishes she was a ninja on the weekends.