Review- From Here to You by Jamie McGuire 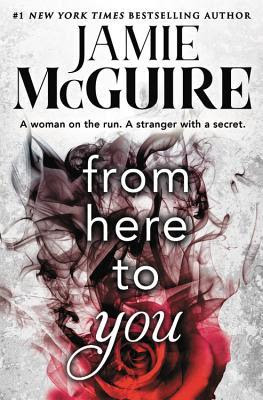 As Darby Dixon sits in a tiny Texas church bathroom on her wedding day holding a positive pregnancy test, she realizes that of all the bad decisions she's made in her life, marrying her abusive fiancé would be the worst. She's never been able to stand up for herself, but she'll sure as hell stand up for her baby. With just the cash she has on hand, she runs to get a bus ticket to the farthest place she can afford. Between her sheer grit and pageant-queen smile, she lands a job as a front desk clerk at the Colorado Springs Hotel. It's not a glamorous life, but she and her baby are all that matters.
A former Marine, Scott "Trex" Trexler has worked in the most dangerous, corrupt, war-torn places on earth. Now he finally has a chance to return to the last place he'd felt at peace--Colorado Springs, Colorado, to take a new job with the Cheyenne Mountain Complex, a top-secret military installation buried deep within the granite.

The moment Trex walks into the inn, Darby knows he's dangerous. There's no way she wants to get involved with another man who seems to be keeping way too many secrets. As charming and devastatingly gorgeous as Trex is, he clearly isn't telling her everything. But as wildfires rage on the mountain and Darby's ex-fiancé shows he isn't so willing to let her go, both she and Trex are soon to find out that what you don't know absolutely can hurt you.

Before I started reading FHtY, I read through the 1 star reviews here on goodreads and was shocked by most of their poor ratings and why they rated it that way. Yes, everyone is entitled to their opinions but my gosh they were ALL wrong!Boring? Heck no! Long? I could have read about Darby and Trex forever!Overload on the religious stuff? Nope! And so what if it was? Why have a dig at someone for adding religion to a story?I think the review that bugged me the most was someone getting their feathers ruffled because a character who was military was abusive to his partner. I'm sorry to say that it does happen, and has happened! People can work in the most respected field and still have a dark side. So to have a whinge about an author bringing light to that, I'm sorry but you're wearing rose coloured glasses.Now I'm going to tell you why you SHOULD read this book.Darby, escapes her abusive fiance, leaving him at the alter, on the run to freedom, to start a new life. Trex, ex military, ex FBI turned private government security, never wasted time on any woman who isn't "the one". Him falling for her. Her learning to trust again. To feel safe again. All the while facing past secrets that come back to haunt them both. Add in a psychotic ex who wants nothing more than to take back what is "his". I have been reading a few books lately that seem to be just words thrown together to make a "story" and call themselves authors. There is no depth or back story, just a whole lot of surface bullshit and smut. Jamie has created, yet again an in depth, beautiful story about bravery, courage, love, trust and learning to accept no less than what you deserve.Jamie skimps on no details and really paints the picture for every scene without leaving you question how those scenes came to be. She creates a realistic story that is so touching with characters that are relatable and so human that you can't help but feel everything they feel. They are characters you root for. So if you are looking for a beautiful story that you can invest in. A story that captivates you. A story that shows the good and bad side of humanity, then read From Here to You. You won't regret it.

Email ThisBlogThis!Share to TwitterShare to FacebookShare to Pinterest
Labels: From Here to You, Jamie McGuire, Must Read, Review, Sassy Book lovers