His eyes as black as the the devils tongue

His melodic voice more tempting than a sirenÕs call

Three years ago, Camille Barker was held at knife point but her attacker wasn't the one who haunted her dreams. No, it was the man that stood a-washed in the yellow glow of the street light, his stare observant but heedless. A witness to the senseless act. The venom that dripped from his twisted lips saved Camille's life and set her soul ablaze. Reemerging from the ashes, she set upon the well worn path her parentÕs always dreamed she would take.

That is until rock n roller, Matthew Lee, shows her that you can only bask in the sun so long before the monsters come out to play. 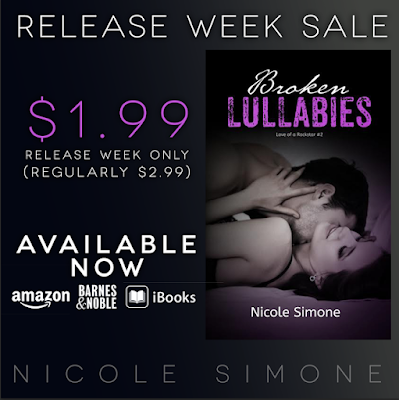 My attention quickly got diverted when a bell chimed over the front door and my eyes lifted.

Panic roared to life. There were a million coffee shops dotting the city streets of Seattle and he came here. Why did I have such bad luck? Sliding my novel in front of my face, I slunk down into the chair as if that would render me invisible.

Do not look over here

Do not look over here

I begged silently for reprieve. Heavy footsteps thumped against the floor, drawing closer. When they stopped, my heart did as well. The scent of Chanel Number Five confused my senses.

Matthew stood next to my table dressed in a pair of dark washed jeans and a button up shirt, opened at the collar. The glasses he normally wore were gone, and I much preferred he’d worn them. His stormy grey eyes were discomfiting.

"You smell like a woman," I blurted in greeting.

A Cheshire cat-like smile spread across his face. "Is that so?"

I met his smile with a scowl. The way he talked, in questions, dancing around whatever secrets he held up his sleeve, made want to slap him -- hard.

Without asking if he could sit down, Matthew pulled out a chair and folded himself into the seat. Stretching out his long legs, he crossed his ankles and leaned back.

My eyes rolled. "Please get comfortable. Stay a while," I said sarcastically.

Another powerful hit of perfume made my head ache. With nobody behind me, my chair scooted a safe two inches away from him. I wished the windows were open though. Matthew's odd choice of deodorant was stinking up the place.

His eyebrows bunched together. "Is it that bad?"

"It's as if you rolled in a vat of flowers."

"I took a shower after."

Matthew smirked. After sex -- that's what he was hinting. Envy stabbed me in the solar plexus but I quickly batted it away. It's not like I wanted to tie Matthew to the bedposts and have my wicked way with him.

"Why? Sex is perfectly healthy and natural." His pupils darkened. "Not to mention fun. Don't you find it fun, Camille?"

Nicole Simone works in digital media by day and at night, penÕs character driven romance novels that will make your mama blush. She lives in Los Angeles, C.A with her fat bulldog named Humphrey.

She loves hearing from her readers and can be reached at authornicolesimone@gmail.com