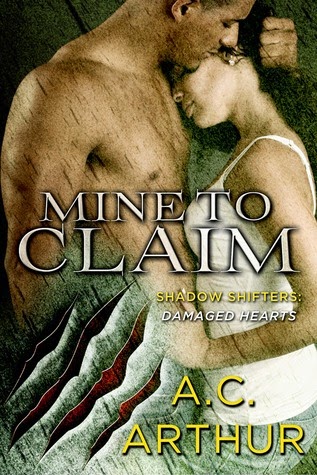 Shadow Shifters: Damaged Hearts—a deeply emotional, unforgettable New Adult paranormal romance series by A.C. Arthur about the men who are sworn to protect the females—human or otherwise—from the savage fury of his own nature…

In Mine to Claim by A.C. Arthur, Grace Kincaid has been trapped her whole life. Controlled in every way by her domineering parents, she has never had any moment of excitement or passion in all her eighteen years. When a rare night out with a friend ends in violence, Grace believes that perhaps her parents are right to keep her under lock and key. There’s just one problem—she can’t get the irresistibly sexy, mysterious man who saved her from danger out of her head. She knows she should go back to her safe world, but her newfound passion for life—and for her enigmatic protector—are making that impossible…Despite his strength and power, Aidan Sanchez cannot escape. Bound by his Shifter bloodline, he is repulsed by the very attributes his family wishes him to embrace. His main goal is to keep his more dangerous…hungers… under wraps. But when a fight at a club forces Aidan to protect the most alluring woman he’s ever seen, there’s no turning back. He knows he shouldn’t drag her into his world, but she’s awakened a fire within him, and for once, he’s willing to lose control if it means having Grace…

“Why do you keep saving me?” I don’t know why I asked that question, wasn’t really sure I wanted the answer. But I didn’t want to walk away from him, not just yet. “I mean you just keep showing up where I am, when there’s some guy bothering me, like you’re my personal bodyguard.”
When he didn’t speak I got worried.
“You’re not, are you? My parents didn’t hire you to watch me, did they?”
“Wow,” he said with a wry chuckle. “What kind of parents do you have?”
I was about to answer or at least give him some sort of retraction statement when I noticed something. He’d smiled, or one half of his mouth had lifted as if he wanted to smile and his voice hadn’t sounded so ominous.
“I guess the same type anybody has,” I replied lightly, “if you have insanely strict and overprotective ones that don’t know when to let go.”
He nodded then, that partial smile still in place. “Yeah, I guess I sort of know that tune.”
“Gotta love ‘em, huh?” I lifted my cup to my lips, drinking from what was left and acting as if I wasn’t standing on the side of a building as darkness was finally beginning to set with a guy that was wanted by the police.
The half-smile faltered. “Guess so.”
A group of people came out of the coffee shop, laughing and joking with each other, their voices causing Aidan’s head to snap in their direction.
“I should go,” he said without looking back at me.
He was right, he probably should go. But I didn’t want him to so I didn’t respond. He didn’t seem to care because he moved around me heading for his bike. I turned, opening my mouth, prepared to say . . . what? “Stay with me?” “Take me with you?” I didn’t have the guts.
Aidan lifted his leg and sat on his bike. With one booted foot he pushed the stand back and straightened the bike. Digging in his pocket he pulled out a key. I was watching his every movement as if transfixed. His fingers were long, his hands wide, he looked strong. He started the bike and my heart thumped wildly, beneath the leather gloves my palms began to sweat, the hand that held the coffee cup shaking.
“Come with me,” he said softly.
So softly I barely heard him over the rumble of the bike.
“What?” I sounded like a dweeb or a scared, nervous female, or whatever, it didn’t sound good.
He didn’t seem to mind because he repeated his statement, “Come with me.”
The first night he’d said that to me I’d hesitated because Rory had said the same thing when he’d invited me to his house that night. The second time Aidan had said it, last night at the party, I’d been so shocked at seeing him I hadn’t related it to Seattle or what happened there at all. Tonight, he was saying it again and I had a choice. I could get on this bike and go with him—the guy that Scarlett had so politely pointed out was a recluse and I didn’t know a damned thing about. Or I could go back to my dorm room and sit in front of a computer pretending to work when I was really thinking about the recluse that I didn’t know a damned thing about, except that his kiss had excited me more than anything I’d ever experienced in my entire life.
I tossed the coffee cup aside, not caring that I was littering. Okay, that was probably going to bug the hell out of me tomorrow, but not right now, not at this instant. The only thing on my mind right now was climbing onto the back of Aidan’s bike, fitting my front against his back, and loving the feeling of warmth that immediately seeped through him into me. 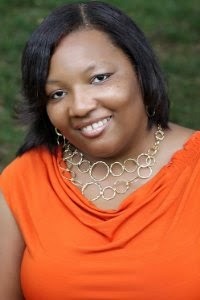 A.C. Arthur was born and raised in Baltimore, Maryland where she currently resides with her husband and three children. An active imagination and a love for reading encouraged her to begin writing in high school and she hasn't stopped since.

Working in the legal field she's seen lots of horrific things and longs for the safe haven reading a romance novel brings. Her debut novel Object of His Desire was written when a picture of an Italian villa sparked the idea of an African-American/Italian hero. Determined to bring a new edge to romance, she continues to develop intriguing plots, sensual love scenes, racy characters and fresh dialogue--thus keeping the readers on their toes!

In the young adult arena, A.C. also writes under the name Artist Arthur. Visit her Amazon Author Page for details about available YA books. amazon.com/author/artistarthurbooks