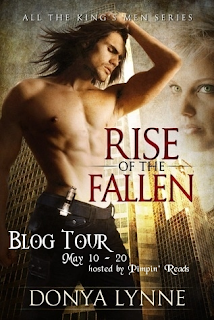 Blurb from Rise of the Fallen:

In the streets of Chicago exists an uneasy, centuries-old truce between vampires and their distant cousins, a race of shifters called drecks. Vampire enforcement agency, All the King’s Men (AKM), is charged with maintaining the truce, but when volatile enforcer Micah Black loses his mate and falls into the biological agony that results from the broken bond, he tests the boundaries of the truce by seeking out Apostle, a leader in the dreck community. Micah wants Apostle to kill him, a request Apostle is more than happy to fulfill.

When ex-Army medic Samantha Garrett inadvertently disrupts the plot and saves Micah’s life, a chain reaction sets Micah’s heart on a collision course with Sam’s, but he will have to protect her from Apostle and her obsessive ex-husband, Steve, if they will have a chance at forever. Can Micah hold his emotions together to keep Sam alive?


What led up to the creation of Rise of the Fallen, the characters, and All the King's Men:

I am reminded of the quote in Under the Tuscan Sun, when Frances says, “Any arbitrary turning along the way and I would be elsewhere; I would be different.”

My life feels like a series of turning points that kept leading me back to writing, the most recent of which was when I lost my job at the end of July, 2010, and couldn't for the life of me find a new one. In fact, in the six months after losing my job, it seemed my life fell apart every time I had an opportunity to work. I became deathly ill with flu three days after starting a temp assignment, my mom became gravely ill and passed away after I started another, I was in my first-ever car wreck (nearly totaled my car) a few weeks into another assignment. Life seemed to be telling me, "You aren't supposed to work, anymore."

It took me a while and a lot of crying sessions curled in the fetal position on my bed, but this past January, I finally figured out what Fate had been trying to tell me. On a Friday, I received a phone call for a "group interview" to be conducted the following Tuesday. Uh-huh. I'd been to some of those. I knew how it would end. Still, the desperate side of me urged me to go. But my heart and gut rejected the idea so strongly, I began crying uncontrollably at the thought, and I felt physically ill.

Monday morning, I was at Whole Foods. The interview was for the following day, and I had tears in my eyes at the idea of going. So, there I was, with my groceries in hand, crying, and walking toward the exit. As I reached the doors, I said right out loud, "Okay, God, I need a sign. Am I supposed to go to that interview, or am I supposed to stay home and write? I need a sign, God, and it needs to be a big one. One that I couldn't miss even if I was blind."

I had been studying to be a published author for years, working with instructors who were published who helped me hone my skills. I had read countless books and written countless assignments for my classes. Writing books was what I wanted to do, and I wanted to do it right. The original plan had been to pay off all the debt, "retire," and write books. Well, here I was without a job. Maybe now was the time to make a run at the dream. I had already started writing Rise of the Fallen and posting chapters on a Facebook fan page, and the feedback was outstanding, so I wondered, could I turn ROTF into my first published piece?

So, I went home from Whole Foods and within the hour, I received my first sign: Silver Publishing emailed me to let me know they had accepted a novella I submitted back in November. Of all days, I got the notification that day, when I needed a sign. But it didn't stop there: A while later, someone contacted me and wanted to host and promote me and my writing on their website. The signs began flying in, one after another. By the end of the day, I had received six major signs and countless smaller ones that writing was what Fate intended for me to do. The realization was so overwhelming, there was no doubt I had received divine intervention (and what makes this story so unique is that I'm not a religious person. Spiritual, yes. Religious, no). Decision made. I wasn't going to the interview. I was going to be an author.

The very next day, the 12-hour (sometimes much longer) work days began. This was my job now, and I haven't stopped since. I finished Rise of the Fallen, which I had been working on for a year, in a week. Then I started on Heart of the Warrior, as well as the development of the rest of the stories in the All the King's Men series.

Of all my characters, I'm closest to Micah. He and I shared a lot of pain together during 2011. Writing him was cathartic during a very dark time in my life, being that I started working on his story when I was undergoing terrible depression and pain – a period I refer to as my Phoenix Phase. I was burning into ashes so I could rise up again, reborn, to start a new life, which I have now. I believe we all have to be raked through the coals in life to truly find who we're meant to be, and the year-and-a-half after losing my job was definitely a coal-raking time.

As I began writing Micah's story, though, which was originally supposed to be a one-and-done, it became clear there were a lot of other characters around him who wanted their stories told, too.
These other characters began speaking to me, wanting me to tell their stories and solve their problems the way I was helping Micah solve his.

I sat back and looked at all these characters, realizing I had a series on my hands. A really juicy series, with a bunch of unique, damaged, tragic vampires who needed my help if they were going to be set free from their pain.

And that's how All the King's Men was born. I have another series planned, as well as numerous stand-alone projects, but I want AKM to be my breakout series. I want to write books for the rest of my life, improving my skills with each story I tell. I would love to start and share this journey with you.

I hope you've enjoyed hearing about Rise of the Fallen and how the story and series were born. Come say hello on Facebook (http://www.facebook.com/AuthorDonyaLynne ) or Twitter (https://twitter.com/#!/DonyaLynne ).

Book two of the series, Heart of the Warrior, comes out on May 25. 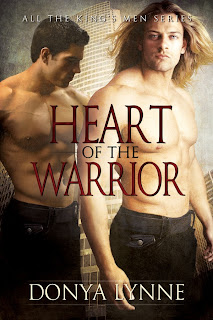 
Thank you so much to Donya Lynne for being on our blog today.

We have an e-copy of Rise Of The Fallen up for grabs, leave a comment with your email addy and we'll anounce a lucky winner on the 22th May. :)

Good Luck to everyone!